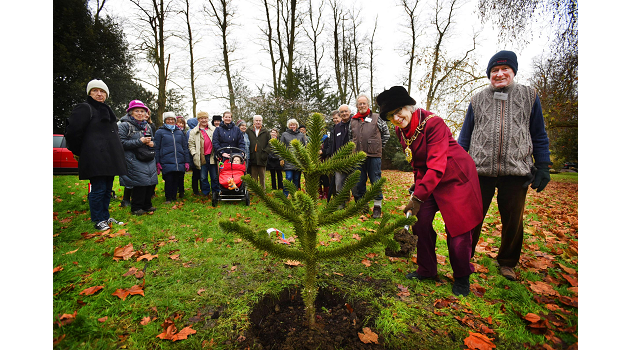 It is the first tree of many to be planted in the coming years within the arboretum, in a new project that is run by Friends of Headington Hill Park to replace old and felled trees.

James Morrell Snr purchased the grazing land on Headington Hill back in 1817, and built a house on the site in 1824.

The arboretum was added by his son James Morrell Junior between 1856 and 1858 when he also built the 51 room Headington Hill Hall with four lodges, a vegetable garden, stables, coach house and dairy.

The then curator of the Oxford Botanic Garden, William Hart Baxter, helped to design the arboretum.

In 1953 James Morrell III sold the hall and gardens to Oxford City Council, and since then the gardens have been open as a public park.

David Colbeck, the treasurer of the Friends of Headington Hill Park, said: “The park has a great history of being home to almost a thousand trees, many of which are of special interest and endangered across the world.

“As these become old and need to be felled, we wanted to replace them with newer, equally rare trees to continue the park’s fantastic heritage.”

The Friends are also preparing a ‘tree walk’ detailing the history of 50 of the most important trees in the park.

To be launched in the spring, the walk will be available to download online to guide visitors around and help them spot some of the rarest trees growing in the UK.

Species that can be found include the Butternut, listed as one of the ‘monumental trees of England’, a Japanese Bitter Orange and an Indian Bean Tree.

Mr Colbeck added: “I don’t think a lot of people are aware of the history of the park.

“Hopefully we can begin to address that with this project.”

The monkey puzzle tree planted at the weekend is the second on the site.