Campaign to save riverside tree 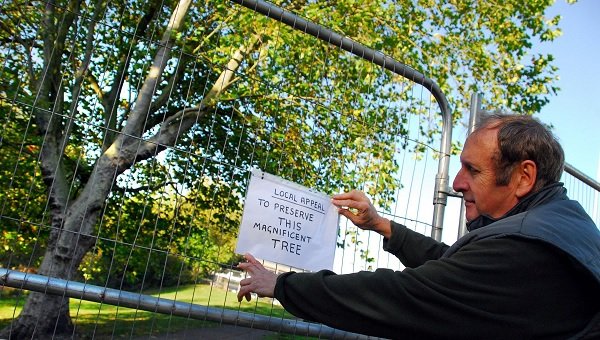 A fisherman from Northwich is campaigning to save a ‘magnificent’ riverside tree from the axe.

Tom Power was concerned when he heard that a plane tree between the River Dane and the entrance to Northwich Memorial Court was to be cut down to make way for the town’s flood defences.

He was fishing at the Dane when he spoke to workmen who said the tree had to move to make way for a new footbath, embankment and small flood wall.

“This is a local appeal to preserve this magnificent tree,” he said.

“A few months ago they cut quite a few trees down, really when they needn’t have done, and three of those were plane trees.

“It would be a shame if this tree went the same as the other ones.

“The tree itself is a flood defence because the roots hold the bank together.”

The Environment Agency is working on a scheme to protect Northwich from flood, which has received £2 million Government funding and £500,000 from Cheshire West and Chester Council.

Tom, from Marston, has been to speak to managers at the scheme’s headquarters, in Chesterway, about whether the position of the path and wall can be altered to keep the tree safe.

“He seemed quite sympathetic towards it but hasn’t confirmed anything yet,” Tom said.

Tom has put up signs to raise awareness of the tree’s potential plight.