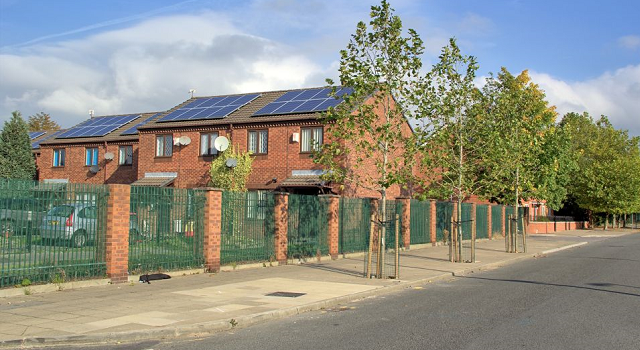 City of Trees, a leading environmental charity, is calling for trees to be used as a technique to combat flash flooding in cities and towns, as well as cleaning polluted water.

Flash flooding is becoming an increasing problem particularly in urban areas. As the population in the UK continues to grow, more green space is being built on which means a reduction in the amount of space for water to drain naturally into the ground.

This loss of green space means that more and more rainwater enters into our sewers which were not designed to cope with the rising number of storms, and increased rainfall, and as a consequence we are seeing an increase in the severity of flooding in our towns and cities.

The charity and partners are keen to highlight the role trees can play ahead of the United National organized World Water Day on 22 March which looks to highlight nature-based solutions to the water challenges we face in the 21st century.

Research undertaken by Dr. James Rothwell from The University of Manchester has demonstrated that trees can have a significant positive impact on managing water in towns and cities.

Results from monitoring over the last two years shows that the trees and soil in which they were planted were able to reduce the amount of water running off the road and draining into the nearby sewer by approximately 75%.

In addition, any excess water that did drain into the sewer was delayed by up to 3 hours which significantly reduces the amount of pressure on the drainage system which helps to prevent sewers overflowing into rivers and streams or the drains backing up and causing flooding our streets.

Dr. Rothwell has been working on monitoring the water quality and quantity on the ‘Howard Street Project’ for the past two years.

Three London Plane trees were planted in a specially designed pavement on Howard Street, Salford, Greater Manchester which was the first ever project of its type in the UK.

Dr. Rothwell explains; “The Howard Street Project provides research evidence for the benefits of street trees in the management of water in the urban environment”.

Many of the trees have been planted in specially adapted tree pits to be able to receive rainwater running off the road, pavement and some of the surrounding buildings.

The rainwater is used by the trees to help them grow and excess water drains through where the trees have been planted and is eventually returned to the sewer system.

The planting formed part of the £2 million Bury New Road regeneration scheme which included roadway and pavement improvements – and shows how green infrastructure can sit alongside city design.

The University of Manchester is also involved in monitoring the ability of the trees to manage and clean water on Prestwich High Street.

Katherine Causer of the Environment Agency said: “More than 5 million homes and businesses in England are at risk of flooding. To protect properties we use a mixture of hard and soft engineering and natural flood management techniques which can be a more cost-effective and sustainable way to manage flood risk, whilst creating habitat for wildlife and helping regenerate rural and urban areas.”

“These ground-breaking projects will help to demonstrate how green spaces in our towns and cities, when well designed, can have positive benefits to people beyond just looking nice.

“The trees will show how we can slow the flow of water running off our roads, pavements and building and help to reduce the risk of localised flooding in addition to removing pollutants which could otherwise end up in our streams and rivers.”

Pete Stringer, City of Trees, comments; “Street trees are just one of the measures that we deliver to help make us more resilient to climate change.

“Research has also shown that planting trees in appropriate places in our upland areas can help reduce the amount of water entering our rivers before they get to our towns and cities.”

He adds; “We believe trees and other natural approaches can provide sustainable solutions to our modern-day environmental problems and urge for these approaches to be adopted not only nationwide, but worldwide”.