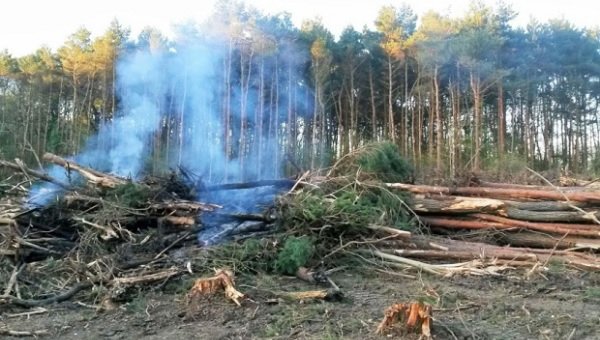 A call to safeguard the future of an ancient woodland site at Albourne has gone out to the South Downs National Park Authority.

The authority is to discuss action over the illegal destruction of acres of trees at Pondtail Wood – which has left local residents, conservationists and councillors shocked – at a meeting on Thursday.Masses of the trees have been felled and burnt and a large amount of aggregate brought onto the site.

Dr Tony Whitbread, chief executive of the Sussex Wildlife Trust, has described it as ‘a devastating loss.’

“This is an ancient site, replanted with conifer trees many years ago but still with its rich flora.

“This ancient woodland site has been essentially destroyed. It’s a devastating loss. It’s an irreplaceable asset,” he said.

The South Downs National Park Authority and the Forestry Commission put a ‘stop’ order on the tree fellling, but the work continued.

Local residents have now formed a ‘Save Pondtail Wood’ action group and are urging people to write to the South Downs National Park Authority to safeguard the future of the woodland so that no further damage can take place.

They also want the site to be replanted and the landowner prosecuted. “Unless this is done,” they say, “ancient woodland is at risk elsewhere.

“The South Downs National Park Authority needs to demonstrate that it can protect its woodland.”

They say that the landowner had no planningk permission or licences to carry out the felling work.