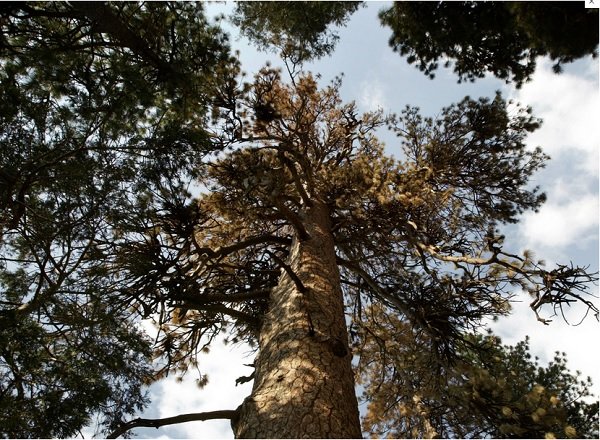 California’s iconic big trees are dying at an alarming rate, according to new research which finds that more than half of the state’s redwoods, Ponderosa pines and other woodland giants have perished in less than a Century.

The researchers suspect that climate change is the biggest culprit and that big trees are acting as the ‘canary in the coalmine’ for the effects of global warming on the world’s forests. Big trees are more susceptible to high temperatures and water shortages than smaller  trees.

“Older, larger trees are declining because of disease, drought, logging and other factors, but what stands out is that this decline is statewide,” said lead author Patrick McIntyre, of the University of California in Berkeley.

“Based on our data, water stress helps to explain the decline of large trees. Areas experiencing declines in large-tree density also experienced increased water stress since the 1930s,” he added.

The dive in the Californian big-tree population is likely to be even more pronounced over the past 100 years than 50 per cent. This is because the survey took in a 90 year period, which ended in 2010 and so excludes the effect of California’s enduring drought, now in its fourth year, the researchers warn.

The report notes that larger trees suffer disproportionately compared to smaller ones when subjected to the rising temperatures and declining moisture associated with climate change.

Scientists debate the reason for this, but many suspect that the larger trees need relatively more water than the smaller trees to withstand droughts and disease.

“The results may help forecast future forest responses to climate change, and in particular suggest that increased temperatures and changing water availability may lead to large-scale changes in forest composition,” notes the report, written by a team of scientists from the University of California and the US Geological Survey.

The report, published in the journal Proceedings of the National Academy of Sciences, monitored changes in the number of big trees – of two feet in diameter or more –using  consensus data gathered in the 1920s and 30s with the first decade of this century. They found that no area was immune to significant declines, while parts of Southern California had seen 75 per cent of the big trees dying out.

The loss of these big trees is more damaging than the loss of small ones because they have a “disproportionate importance to forest structure, function and carbon storage” the report says, sucking carbon dioxide out of the atmosphere and providing food and shelter for wildlife.

When the trees die, the stored carbon is released into the atmosphere.

“There’s no question that if you are losing large trees, you are losing standing carbon in the forest. Loss of these big trees and the impact of drought stress become a big concern going forward in terms of its impact on the carbon cycle; they can turn a carbon sink into a source of carbon released into the atmosphere,” said co-author David Ackerly.

Princeton forest ecologist William Anderegg, who was not involved in the study, lamented the “shrubbification” of western forests.

“The loss of these majestic largest trees is a pretty emotionally powerful thing to think about. These are often the trees that have been around for thousands of years. It’s kind of a less magical future having lost those trees,” he said.