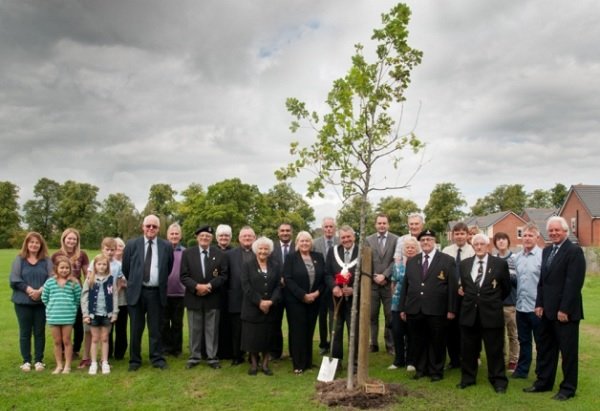 Mayor of the Ribble Valley Coun. Michael Ranson has planted a tree at Calderstones Park, Whalley, in commemoration of 100 years since Britain’s entry into the First World War.

Calderstones Park is a modern housing development, but forms part of the site of the former St Mary’s Military Hospital, which opened in 1915, and evolved into today’s Calderstones Partnership NHS Foundation Trust, a specialist hospital for people with learning disabilities.

The Mayor was joined by local dignitaries representing the parish and parish council, the Royal British Legion, Whalley Scout Group and Calderstones Hospital.

These included Couns Joyce Holgate, Terry Hill and June Brown, from Whalley; Nikhil Khashu, Director of Finance at Calderstones; Fr Price and the Rev. Gill Dyer from the village’s churches; the British Legion’s Norman Whitham; and Steve Tomlinson, of the Scout Group.

The Rev. Dyer said prayers and the Mayor read an extract of war poetry to invited guests, who were joined by locals from the housing estate. Coun. Brown presented the Mayor with a decorative poppy which originated in Flanders.

Calderstones is marking the start of the conflict with a display of images of the hospital during its time being used for military purposes.

The photos and newspaper extracts from a century ago have been provided by Whalley historian and resident George Hardman, who recently retired from the Trust.

Later this year, the Trust’s annual remembrance service will continue Calderstones commemoration of the war.