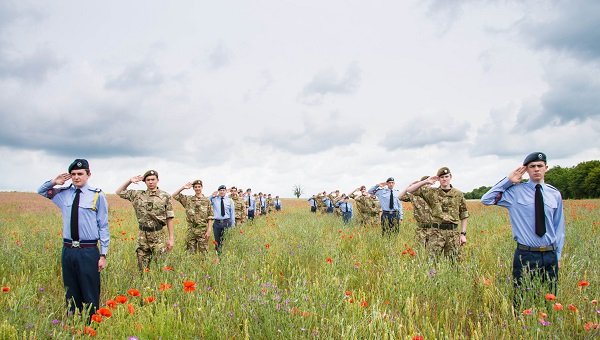 Thousands of young cadets are standing side by side across the UK as they salute the beginning of a £1 million First World War Centenary Woods fundraising challenge.

Dozens of army and air cadets gathered among swathes of poppies and wildflowers at Heartwood Forest, near Sandridge in Hertfordshire, to show their backing for a unique project by the Woodland Trust to honour those who fell in the First World War.

The determined cadets are aiming to raise more than £1 million through fundraising for the ambitious project which will span the four years of the war centenary.

The aim of the charity’s “First World War Centenary Woods Commemoration Project” is to create four centenary woods, one in each of the four home nations, where thousands of trees will be planted, along with millions of free trees planted by schools and communities across the UK. Many of these will be dedicated by the public in honour of their ancestors who fought in the Great War – and those who were affected.

Chief Executive of the Woodland Trust, Beccy Speight said: “I am delighted that these and thousands more are supporting us with such a challenging fundraising goal.

“As we know families up and down the country were affected by the First World War and what better way is there to mark that than by planting a tree to give a lasting and growing legacy for those who lost their lives or were affected?

“It is fitting that the cadets, some of who will be a similar age to those who went to war, should be among the surroundings of Heartwood where there are lots of poppies – a resepctful symbol of remembrance.

“Heartwood is also a young wood and will mature for years to come. With the young cadets, the event will of course celebrate the future but our thoughts will also be on the past too.”

“I have every confidences that the Cadet Forces, represented at Heartwood on Friday by the St Albans School CCF (Combined Cadet Force) contingent, will again make a significant and valued contribution.”

*Sainsbury’s will be partnering the Woodland Trust to deliver the Centenary Woods project.