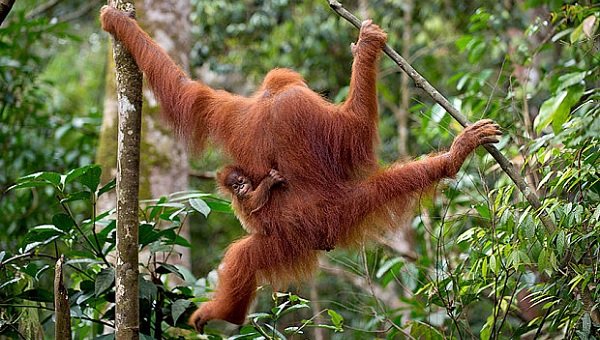 British tree surgeons are to be sent to Sumatra to teach local orangutan rescuers tree-climbing skills.

The apes are endangered and need help as they get stuck in limited forest where surrounding trees are felled for logging or growing palm oil plantations.

Scientists also say that while they are a protected species, around 1,000 orangutans are poached every year for the pet trade or to be eaten.

The British team will travel to Medan in the north of the Indonesian island next month to work with the Human Orangutan Conflict Response Unit, which was set up in 2010.

Rescuers can spend days tracking the apes from the ground and have to wait until vets can safely fire an anaesthetic dart at them.

They then catch the orangutans in giant nets as they fall from the trees.

Geoff Pugsley, 29 from Basingstoke in Hampshire, will be among the five-strong team from the UK to travel to Sumatra.

“We’ll be teaching them techniques that we use to work on trees every day. They’re tried and tested methods, but they’re simple,” Mr Pugsley said.

“It will make it less traumatic and there will be less risk of injury.”

He said that the two-week training project, which will take place in the rain forest, will involve rescuers learning to throw a weighted bag over a branch and then attach a climbing rope. From there they will be taught to climb the ropes safely into the rain forest canopy.

Fellow tree surgeon Marcus Nicholson, 26, said the main objective was to teach the Sumatran team how to safely access the trees.

The Sumatran Orangutan Society, which is backing the training scheme, said it was hopeful the help from the UK would result in more orangutans being saved.

Helen Buckland, director of the Sumatran Orangutan Society, said: “If the rescue team can climb they will be able to rescue orangutans quicker and more efficiently. That means we can reach more animals.

“We know of many animals that need rescuing and we can’t get to them all. They are on a waiting list.

“If we can take more animals from these small, threatened areas of forest and release them into bigger areas they can help the species survive.”

A fully-grown male orangutan can weigh up to 28 stone, be 5ft tall and have an arm span of over 6ft, so catching them as they fall from trees after being tranquilised can be hazardous.

The primates are later returned to larger areas of forest. More than 60 have been rescued since 2012, including eight this year.