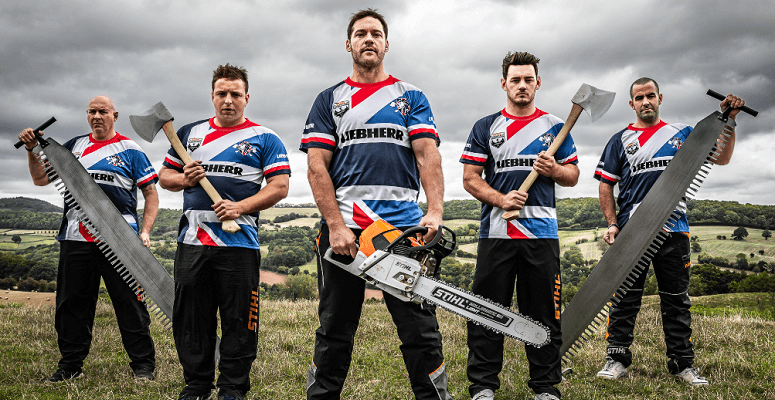 Team GB aim to make most of home advantage in the Stihl TIMBERSPORTS World Championship, which takes place at Echo Arena Liverpool on 19 – 20 October.

British champion Elgan Pugh teams up with fellow countrymen Glen Penlington, David Thomas and Andrew Evans. Craig Golder is in reserve. This is the first time the UK has hosted the Stihl TIMBERSPORTS World Championship.

The World Championship will see the best athletes from more than 20 nations around the globe battle each other against the clock. There are a variety of highly-skilled, fast-paced disciplines inspired by the logging industry.

The British hopefuls will take part in the Team Event on Friday, October 19. The national teams compete against each other in a knockout system. In this, the disciplines of Stock Saw, Underhand Chop, Single Buck and Standing Block Chop are completed by four athletes in a relay.

Elgan Pugh will then take his place in the Individual Event on Saturday, October 20. Here, the world’s top 12 athletes will compete against one another in all six disciplines.

Team GB are looking to make the most of the home advantage and get the crowd behind them this October. The 2017 individual winner Jason Wynyard and team competition winners New Zealand will be hoping to retain their titles.

“It’s an honour to be named in the British team and I can’t wait to represent the country.

“We’re excited to test ourselves against the very best athletes in the world. Home advantage can play a crucial part and it will feel incredibly special walking out in front of a sell-out crowd in Liverpool.”

For more information on the event or to purchase tickets please visit: https://www.echoarena.com/timbersports