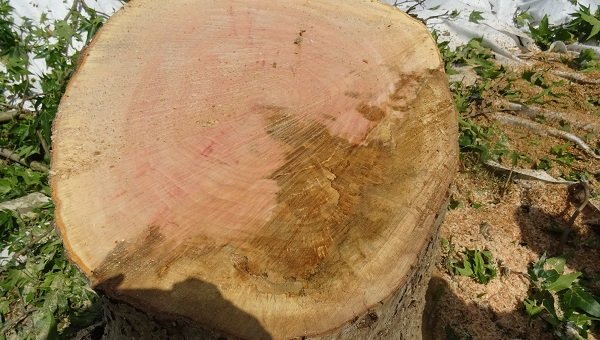 The threat posed to Britain’s plane trees by plane tree wilt (Ceratocystis fimbriata f. platini), an ascomycete fungus which originated in the eastern United States, is growing as it works its way northwards through France at a faster range than previously.

What is plane tree wilt and what does it do?

It is a fungal infection which causes canker stain on plane species. The fungus causes vascular dysfunction, canopy dieback and then death. There is no cure. It is a wound parasite, and prevention can only be achieved by control of the movement of infected wood or wood products which allow the fungus to spread to non-infected trees through wounds. The implications for plane trees in Britain are huge, particularly in urban areas.

What was the purpose of the workshop?

It gave us the opportunity to view plane tree wilt in the field, to see the sanitation methods involved when felling infected trees and the chance to look at the symptoms under a microscope so that we are able to identify the fungus should it reach the UK.

How easy is it to identify plane tree wilt?

The first thing Lucio did was to take us on a tour of several sites to look at other threats to plane, and their symptoms, which can be confused with the early stages of plane tree wilt. For example, we looked at the effects of anthracnose, herbicide damage, stress symptoms and where accelerated growth causes longitudinal bark splitting. We then went to sites to view trees with plane wilt. .

So what are the symptoms of plane tree wilt?

Lucio pointed out how the fungus spreads across the canopy with a characteristically uneven desiccation pattern apparent. If the infection is caused by an aerial wound, the disease travels across the canopy and in vertical sectors following the vascular pathway downwards, leaving the canopy partially dead and partially alive.. What was apparent, and very interesting to the group, was that on one tree the main trunk was dysfunctional or dead on the side opposite the dead part of the canopy.

Why should that be?

It’s because the fungus spirals within the vascular system around the main trunk of the tree. Lucio showed us how the wilt can be identified by visually noting the boundary between functional and dysfunctional bark, and then scraping off the surface. It was easy to see the boundary line between necrotic and healthy tissue; the dead was brown, the live a yellow-green. This boundary was distinctly linear and flat, and absolutely clear to see. Lucio said no other disease of plane displays this distinctive characteristic, so the identification is positive.

How do plane trees become affected by this wilt?

Lucio told the group that the infection of live planes is primarily transmitted via open wounds – most commonly on dirty arboricultural tools. A diseased tree is then capable of infecting its neighbours through natural root grafting. Death occurs when vascular dysfunction occurs all round the plane. There is some risk of aerial dispersal or by means of flying vectors such insects and other animals, but Lucio emphasised that there is no clear evidence of these having an important role.

The fungus can also spread through natural root grafts where trees are usually less than 15 metres from each other with physical obstacles such as pavements or water which encourage roots to develop towards neighbouring trees.

So the spread of plane tree wilt is in great part due to human activity?

Yes. Saws and chainsaws transfer debris in the form of sawdust from tree to tree if they are not cleaned thoroughly after use on every tree. And the fungal spores can remain live on sawdust for up to two years.

What is best practice in sanitation relating to planes?

We went on to watch an arboricultural crew felling an infected plane, which gave us an insight into this. Our group had to wear disposable plastic clothing to ensure there was no risk of us bringing sawdust back home. Two hours wearing plastic bags in 30ºC was quite arduous! All the ground for 250sq m or more around the tree was covered in polythene and the debris which fell onto it was carefully disposed of, as were our plastic suits.

Did you inspect the felled tree?

Yes, and when we looked at cross-sections the staining and infection pattern were apparent.

What did you learn from looking at the work of the fungus under the microscope?

This session was also very useful and informative. We looked at cultures of plane tree wilt and learned from Lucio how to identify its characteristic features. He reassured us that to arborists the symptoms are readily identifiable under the microscope because they are unique and totally unlike anything else, so there can be no question of a mistake.

Was the workshop useful?

Definitely! The more we can understand about plane tree wilt, its spread and prevention, the more we can do to help defend plane trees here in Britain. Its march may appear relentless, but good husbandry will certainly play a major part in keeping it at bay.

For more information about Treework and their courses, visit their website here.