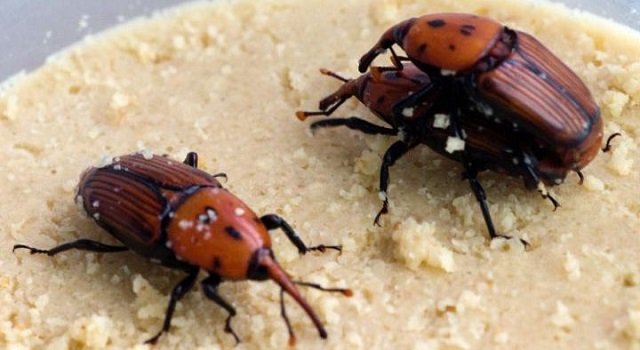 Britain’s palm trees are under threat from a parasite which has already destroyed trees across the Mediterranean.

For the first time a beetle which wipes out palm trees has been discovered in the UK.

The red palm weevil has been found infesting an imported European fan palm purchased from an Essex garden centre.

There are now fears that the pest could become established in places like Torquay, Devon, or central London where the climate is mild.

The weevil has already wiped out French Riviera palm trees long synonymous with the glamour of the Cannes Croisette or Nice’s Promenade des Anglais.

The bug also attacks ornamental palms imported into Britain like the fan palm and chusan palms.

Each adult female weevil lays up to 300 eggs in holes in a tree and the larvae munch their way from top to bottom.

When they damage the crown, the tree is then unable to produce new fronds and dies within months.

The beetles can often be heard by placing an ear against the palm’s trunk.

The Animal and Plant Health Agency is investigating the discovery.

“This is the first detection in the UK. Red palm weevil adults and larvae were identified in a palm purchased from a retailer in Essex,” a spokesperson said.

“APHA established an incident action plan and is carrying out tracing, surveillance and awareness raising to determine whether the pest is present elsewhere.

“The weevil only affects palm plants and presents no risk to human health.”

He said: “It would not surprise me if there was the odd breeding population here.

“The red palm weevil is a very good flyer that can cover great distances and insects can improve their tolerance to cooler climates over generations.

“It could gradually move up the French coast, getting a few degrees further north each year.

“It is the largest weevil and one of the biggest beetles in Europe, a very destructive pest that eats the whole of the inside of the palm.

“It is systematically killing trees all over the Costa del Sol.”

“We are seeing an avalanche of invasive species coming into this country from Europe in the soil of the pot plant trade because there are no real checks.

“It is completely irresponsible to allow this trade to continue.”

Guy Barter, chief horticulturist at the Royal Horticultural Society, said that it is unlikely the species will be able to survive in the north of the UK due to colder winters.

“The weevil might get a foothold in places with palms like Torquay and central London where the climate is particularly frost free,” he added.

“It is a voratious bug that is extremely damaging to palms. It hollows them from the inside out until the whole palm collapses.

“This shows the very great importance of rigorous quarantine when planting palms from abroad.”

The red palm weevil – Rhynchophorus ferrugineus Olivier – is native to Asia and a serious pest of coconuts.

The beetle spread to the Middle East in the 1980s after arriving in shipments of infected trees.

From there, the weevil rapidly spread west into northern Africa, devastating date plantations before first reaching Europe in Spain in 1994.

In Italy since 2004, it ate its way through tens of thousands of palms in the beach resorts of Sicily. Sardinia and the Adriatic and decimated some of Rome’s historic parks.

The pest, which has a life cycle of around four months, has also since spread to Greece, Cyprus, Turkey and France.

The Food and Environment Research Agency says the only way of controlling the spread is to cut down infected trees.