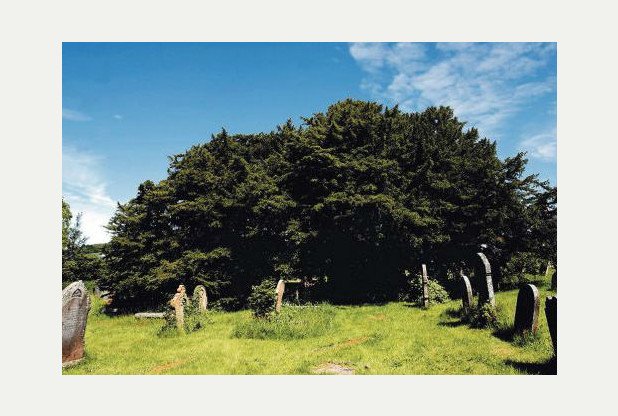 A tiny village is believed to be home to Britain’s oldest tree — a yew that first took took root more than 5,000 years ago. The majestic yew that lives in a Powys churchyard was 3,000 years old when Jesus Christ was born, according to tree ageing experts.

Experts have run tests on the tree in the St Cynog’s churchyard at Defynnog including DNA and ring-dating.

“It was planted on the north side of the ancient burial mound which is now the churchyard, probably in honour of a neolithic chieftain.

“It is so old that it has split into two halves, one 40ft (12 metres) wide and the other 20ft (6 metres) wide. Its DNA has been tested by the Forestry Institute and its ring count is 120 per inch which makes it more than 5,000 years old.”

There are hundreds of ancient yew trees across Britain, but the 60ft wide giant at St Cynog’s is believed to be the most ancient of them all.

The trees usually live between 400 and 600 years, although some live a great deal longer. One reason for the plant’s longevity is that it is able to split under the weight of very old growth without falling victim to disease in the fracture, as most other trees do.

Another reason is its ability to give grow new shoots, even in old age.

The yew is found in churchyards across Europe because the early church often took over existing religious buildings as it converted and took over pagan regions.

Church in Wales property services chief Alex Glanville said: “Yew trees have survived in Wales better than anywhere else because of our wet climate and lower light levels.”