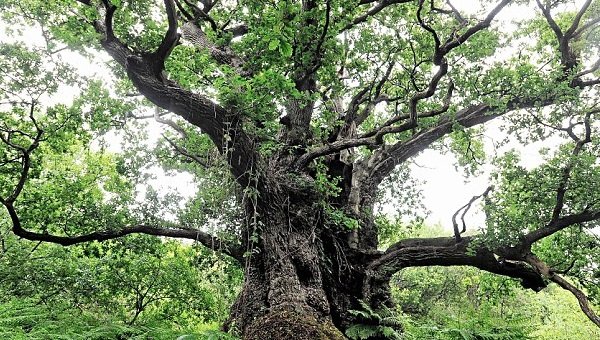 Britain has discovered what is rumoured to be, its oldest oak. Experts from the Ancient Tree Forum have predicted that an oak residing at Blenheim’s High Park, is probably the oldest oak in Britain. It has been estimated that the oak dates back to the middle ages, and is deemed to be approximately 1,046 years old.

The latest measurement, made four weeks ago, means the oak started growing in AD970, a century before the Norman Conquest. It was more than 500 years old at the Battle of Bosworth and 700 years old when the first Duke of Marlborough began to build Blenheim in 1705. However, it is not possible to put an exact date on the old oak. Like most ancient oaks, its trunk has hollowed out over centuries, meaning you could no longer count its rings, even if the tree were to be felled.

Instead, the experts measured its enormous girth and came up with a circumference of ten metres. Comparing that with the girth of other trees with known planting dates, the experts came up with the 1,046-year figure. Oak’s are deemed ancient when they reach 400 years old.

Roy Cox, Blenheim’s rural enterprises manager, said: “Before, we thought our oldest oak was the King Oak, a 925-year-old tree nearby, which is more than nine metres in circumference”

“We have known for some time that Blenheim Palace is home to one of the greatest collections of oak trees in Europe. But, as we gain a better understanding of the woodland, it continues to reveal new secrets.”

The great oak is showing signs of age. One of its lowest branches has collapsed, but it is still clinging on to the tree, stretching out at a horizontal angle. Where the oak has had to take the strain of the enormous branches, it has built up a thickly ridged layer of compressed bark underneath. At some dramatic moment centuries ago, the oak’s trunk split in two, but both halves kept on growing.

The ancient oak has gotten shorter in old age as its crown has ‘retrenched’, or reduced in size. ‘It starts to shrink and loses its outer limbs,’ says Roy Cox. ‘It goes back to its minimal form.’

The tree has grown fatter and more squat, building up extra bulges of timber at its base to support the mass of branches above. The rule of thumb for ancient oaks is that they grow for 300 years, mature for another 300 years and then ‘veteranise’, or decay, for another 300.

Visitors can walk on a designated path through the wood and view the ancient trees — which are 90 per cent oak, with some beeches scattered around. However, the oak must be kept out of bounds to preserve its habitat.