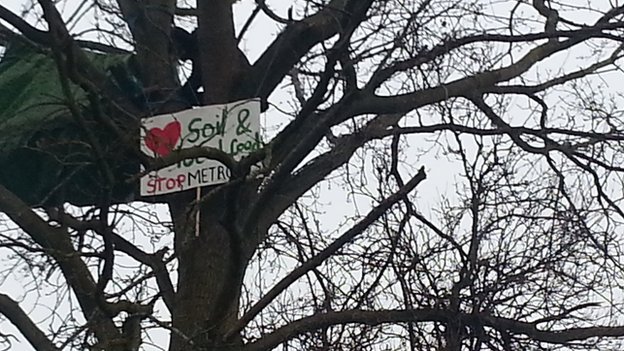 Campaigners have spent the night perched in trees in Bristol to stop them being felled for a new bus route.

The group wants to save them from being cut down on council-owned land at Stapleton Allotments for segregated lanes for the city’s Metrobus scheme.

Protestor Tim Lawrence, from the Rising Up collective, said they would “stay up there as long as it takes”.

Police said they were “monitoring the situation” and were at the site to “assist the council”.

The Metrobus scheme has been designed to get more people using public transport and cut journey times. It involves three routes across the city which all have planning approval.

Campaigner Tim Lawrence, from Bristol, said the group wanted to “safeguard the wildlife”

Mr Lawrence said: “We’re here to say we don’t want these trees cut down. Some of us will be up there as long as it takes to get people to listen and to come up with a sensible alternative.

“We’re here to safeguard and protect key food-growing land and wildlife habitats, which is a job that Bristol City Council should be doing – especially in our year as European Green Capital.”

A council spokeswoman said: “Contractors working for Bristol City Council have started work on the reconfiguration of Stapleton Allotments.

“The affected allotments plots are being relocated to make way for a new bus-only junction as part of the MetroBus project.”

She said “seven new trees within the reconfigured allotment site” would also be planted.

The three Metrobus Scheme routes are Ashton Vale to Temple Meads, Cribbs Causeway via Emersons Green to the city centre and South Bristol link between the A370 Long Ashton bypass and Hengrove Park.

Work on relocating the allotments to make way for the Metrobus project is set to start later this year.
source
← PREVIOUS POST NEXT POST →