Bristol tree-planting gatecrashed by protesters trying to save trees 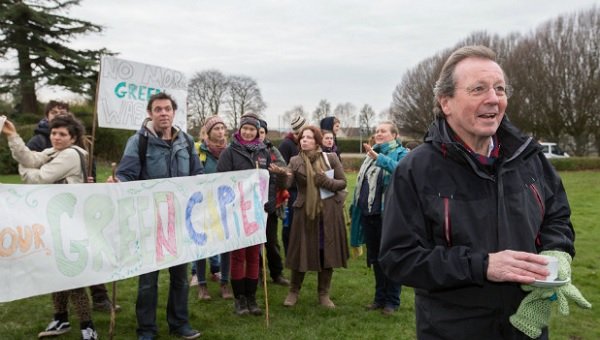 Protesters gatecrashed a tree-planting ceremony as part of their fight to save mature trees which are due to be chopped down to make way for Bristol’s controversial MetroBus project.

But the ceremony next to a play area in Eastville Park was disrupted by campaigners who asked why a celebration of trees being planted was taking place at the same time as existing trees were due to be chopped down a short distance away, at an allotment site in Stapleton.

They chanted: “Our community voice needs to be heard!”

One of the protesters held a cartoon next to Mr Ferguson of someone wearing red trousers sitting on a toilet.

Bristol Mayor George Ferguson told the Bristol Post: “I think it was a great shame because the event was a brilliant celebration of this really worthwhile national project to plant one million trees.

“I felt it was a bit of a spoiler for the enjoyment of the event and unfair for the children who took part.

“Unfortunately, these protesters have blown this issue out of all proportion, because the loss is minimal and they are failing to see the wood for the trees.

“My first reaction when they turned up was to protect the children because for them, I think it was a bit confusing.”

Mr Ferguson said he had done more than anyone to minimise the environmental effects of the MetroBus project.

He said he had successfully negotiated for the bus-only bridge over the M32 to be single-track instead of double and to protect the land by not going ahead with a park and ride site on the allotments.

He said: “I understand the emotions but I think there is a lot of misleading information around this. I have a tremendous respect for the allotment holders and many others who have been involved with the MetroBus project but this issue has been hijacked by a few people who seem to be collectors of causes.”

Belinda Faulkes, from the Rising Up Campaign, said: “It was not intended to be a demo or disruptive in any way.

“We simply wanted to use the opportunity to pass on some requests and information for the Mayor.

“What happened was that I was not allowed to do that and I was stopped from speaking.”

She said that Ms Truss refused to accept anything from her.

Ms Faulkes added that Mr Ferguson was clearly annoyed with their presence.

The protesters have been spending some of the coldest nights of the year living in the trees near the Stapleton Allotments near the junction of Frenchay Park Road and Stoke Lane.

They believe the MetroBus project will destroy vital fertile soil and loss of trees and shrubs.

No allotments will be lost as a result of the work but some of them will be reconfigured so a MetroBus junction can be built on the cleared land.

Work will involve the removal of trees and shrubs so that the new allotments will be clear for cultivation and not overshadowed. Seven new trees will be planted on the rearranged site.

The bus-only junction is needed to make dramatic savings in journey times for buses running between the northern fringe of the city and Hengrove.

The Big Tree Plant campaign was organised by Defra, the Government department together with the Forestry Commission which has provided £4million to pay for the planting and caring of trees.

Mr Ferguson said: “Every tree planted by a child highlights the importance of trees to the environment and the food chain and encourages our children to play an active part in building a better Bristol for the future.”

Ms Truss said: “Nothing is more symbolic of England’s trees than the mighty oak. So it’s fitting that I am planting a young oak today to mark the success of our campaign to plant a million trees in English towns and cities.

“Trees are an essential part of the healthy environment that is so important for quality of life and wellbeing. That’s especially true in areas which don’t have much greenery, which is why we have made sure that all of the trees planted have been in urban areas of the country or in places with the least trees and green space.”