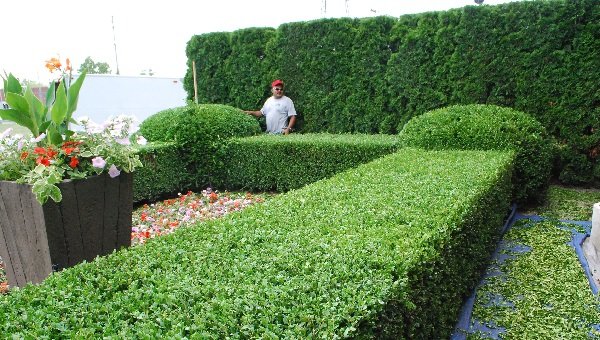 There are a number of reasons for boxwood to decline. Dr Glynn Percival and Emma Schaffert of the Bartlett Tree Expert Company examine symptoms and treatments.

One of the most common problems is Box Blight, caused by two fungi; Cylindrocladium buxicola and Pseudonectria buxi. When boxwood plants suffer from this disease, the symptoms tend to manifest as prolific leaf browning and crown dieback, with powdery spores visible on leaves later on in the season. With C. buxicola, young stems often also exhibit black stains. The disease thrives in warm, humid conditions, so maximizing air circulation is essential. Thinning dense boxwoods and removal of dying stems can improve circulation and sunlight penetration but take care not to over-prune, which could stimulate denser growth.

The RHS have reported spores can remain viable on leaves for 6 years so remove as much diseased material as possible. Avoid watering the canopy of box, as this can encourage more moisture to build up on the foliage especially in hedge situations. Fungicidal products are available to help suppress this disease, which if applied at appropriate timings could subdue disease development later in the season, but they will not necessarily eradicate the fungus. Plant defense activators could be applied to stressed plants which allow the plant to defend itself by activating its own inherent defense systems and strengthening their cell walls against disease attack.

Similarly to Box Blight, this fungal disease attacks Buxus foliage causing orange-brown blister like spots to develop which contain the spores. Caused by Puccinia buxi, this disease spreads to new leaves in spring and early summer. Fungicides are available to suppress this disease, and the cultural control methods described above are also recommended.

If chlorosis and browning are visible, but there are no fruiting bodies present on the leaves, then the issue is usually located in or around the root collar/basal stem area, the roots themselves, or the soil. We often see declining boxwoods with buried root collars, soil moisture issues, or root disease. Any of these stresses may trigger dieback and decline. Phytophthora is a soil-borne disease that commonly infects Buxus spp. Scraping away bark from the root collar and lower stems to check for discoloration in the underlying tissue, will indicate disease or decay. If Phytophthora is present, fungicidal control products specifically for this disease exist which can potentially aid in recovery.

This is a relatively new pest to the UK, but it has become established in South East England, especially in London.  This larval pest Cydalima perspectalis can completely defoliate box plants with excess webbing usually apparent when infestations occur. The caterpillars are light green/yellow with black and white stripes along their body, with white and brown iridescent adult moths . Pyrethroid-based insecticides can be used for control, but biological control options are also available.

This midge deposits its eggs in new foliage from April to May, before the larvae begin to feed in between the leaf surfaces. This creates small round swellings on the leaf surface, and can also cause chlorosis and small patches of dieback.  The damage caused by this pest is mostly aesthetic with little effect on plant vitality, however damage can increase susceptibility to other pests and diseases. Control is difficult due to the pest residing within the protection of the leaf, however systemic insecticides are available which should prove useful.

Contact the Bartlett Tree Research Laboratory for more advice on issues with your box plants.