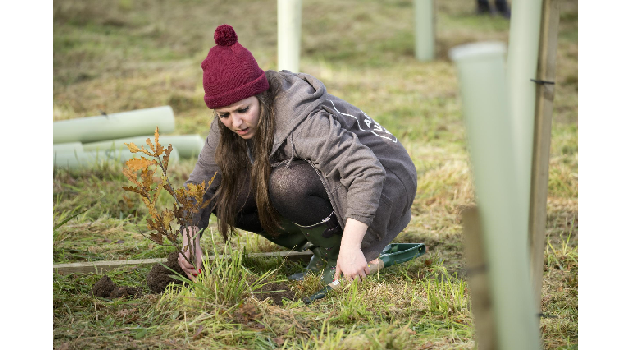 Bournemouth students are planting for the future as part of an ambitious plan.

They have been out in force to establish 1,000 new trees at Hicks Farm, close to the River Stour at Muscliff.

The idea is that each tree will help offset the carbon footprint of students enrolling at Arts University Bournemouth.

The green scheme is the brainchild of the AUB Students’ Union.

AUBSU president, Oscar Woodruff, said: “Planting a tree for every new student at AUB is a fantastic tradition and a creative way of offsetting the carbon footprints of each incoming student.

“The greenhouse gas emissions caused by organisations and people are still not being taken seriously enough by many, so we are doing our best by considering all issues relating to sustainability wherever possible to encourage and support positive change.”

The trees are being supplied by the Woodland Trust and all have been grown in the UK.

They will include 500 English oaks and a mix of other native broadleaf species.

One group of trees are being planted in a field alongside existing woodland to help create a wildlife corridor.

Another set will help increase tree and hedge cover alongside a path enjoyed by walkers.

Hamish Thomson, the trust’s regional woodland creation adviser, said: “As the new trees mature they’ll help increase Dorset’s tree count, which is currently under the national average, with just over 11.5 per cent woodland cover. The figure recommended by the Government is 15 per cent.

“Trees naturally absorb and remove harmful carbon dioxide emissions from the atmosphere helping to cleanse and purify the air, so it’s fantastic that the students are committed to investing in a healthier environmental future.”

Bournemouth Borough Council, which owns Hicks Farm, is supporting the Students’ Union by offering the land for planting.

This is the second year of a three-year AUBSU joint project with the Woodland Trust, which will see 3,000 trees planted by the end of 2016.