Bothwell residents hit out at plans to fell M74 trees 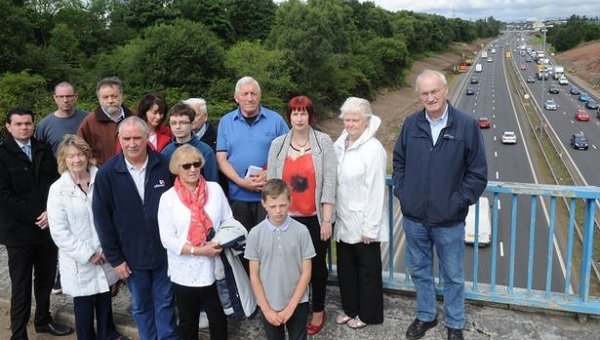 Bothwell householders are up in arms over plans to fell mature trees and vegetation which screen their homes from heavy traffic on the M74.

Residents in Wordsworth Way, whose houses back on to the busy motorway, were stunned to discover that contractors aim to take out approximately 40 metres of greenery on the motorway embankment later this month.

The work, which involves constructing a fourth lane on the M74 northbound along with an extended on-ramp, is part of the ongoing project to improve the Raith interchange.

The removal of the trees is scheduled to take place on August 20.

Wordsworth Way householder Patrick Collins told the Advertiser this week residents noticed a blue rope had appeared across the densely wooded area behind their homes on Friday July 31.

When they asked Transport Scotland contractors’ Scottish Roads Partnership what this meant they were “shocked” to learn that all the trees up to that point from the motorway edge are to be felled.

Mr Collins said: “This work will leave us looking down a bald embankment to what will shortly become eight lanes of motorway.

“All that will be left will be about four metres of vegetation which residents have put in behind their homes over the years.

“We are very concerned about an increase in noise from the motorway.

“Things are noisy as it is. There’s also fumes from traffic exhausts and more light pollution from traffic and motorway lighting to consider.”

According to Mr Collins an environmental statement for the project carried out for Transport Scotland in 2004 expressed “no intention to denude the embankment of trees, but only to remove enough vegetation to enable the additional northbound lane to be constructed.”

He also stressed that at a ‘Drop In Day’ organised by contractors in May this year residents were told there were no plans to remove trees from the embankment ‘other than those necessary to construct the additional northbound lane and extended take-on lane’.

Mr Collins added: “We accept that some loss of greenery is necessary, but we were not prepared for the amount earmarked for removal.

“We feel the contractors have shown a blatant disregard for residents’ amenity by the cavalier fashion by which this has been decided.

“The work will proceed without due consideration and justification.”

And Central Scotland MSP Margaret Mitchell, who residents approached about the matter, said: “It is now evident that SRP intends to deviate from the original plans issued by Transport Scotland which were the subject of the necessary statutory process.

“This not only makes a sham of the public exhibitions held prior to the improvement works commencing, but given the extensive nature of the deviation which has not been consulted on, the necessary statutory process has not been followed.”

Transport Scotland however insisted vegetation clearance had been highlighted in an environmental statement published in 2007. Their spokesman added: “This includes new planting to mitigate the loss of vegetation with existing soils being reused where possible to conserve local seedbanks and soil biodiversity.

“Existing trees and vegetation will only be removed where it is necessary by the design and construction works, and is subject to review and independent monitoring on site to ensure existing vegetation is retained where practicable.

“SRP has agreed to meet with the Bothwell residents to discuss their concerns.”