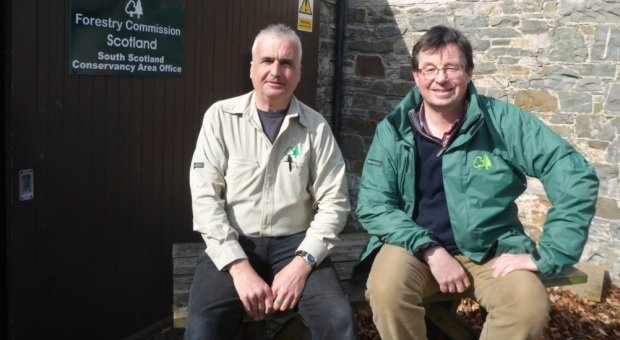 A tree health officer has been appointed to help the Scottish Borders tackle a serious disease which experts predict will wipe out 95% of ash trees in 10 to 15 years.

Steve Morgan, who has worked for the Forestry Commission in a wide range of roles in the past, takes up the new job and will cover southern Scotland from his base in Selkirk.

His priority will be tackling ash dieback, which can now be found in every 10km square in the Borders.

It is especially prominent in the eastern Borders, where most ash trees can be found.

The Forestry Commission in the Borders is taking action. But some experts believe there is little chance of killing a disease which has spread quickly throughout Britain.

Iain Laidlaw, the commission’s Scottish Borders operations manager, said: “There is no known remedy for Chalara, which is predicted to see the loss of 95% of ash trees in 10 to 15 years’ time. The loss of these ash trees will have a significant impact on the local landscape.”

The disease, first recorded in Poland in 1992, was detected in Britain for the first time in 2012.

Although the government imposed restrictions on the movement of ash plants two years ago, the disease has continued to spread.

Data published by the Forestry Commission earlier this year shows that the number of British woods affected has tripled in two years.

Experts fear the problem is the biggest threat to British woodlands since Dutch elm disease killed off 25 million mature trees in the 1970s and 1980s.

Mr Morgan knows the scale of the task he faces and hopes the Borders public can help by mapping out the extent of the damage across the region.

“I’m looking forward to the challenge,” he said of his new jop. “The two big issues in south Scotland are Chalara Ash Dieback and Phytophtora ramorum, which affects larch trees and has so far reached the Peebles area.

“For the moment I am assessing the extent of ash dieback in the Scottish Borders.”

Ash trees in the Borders are often found in hedgerows, roadsides, parkland and in small woodland clumps as well as native woods.

Mr Morgan is asking the public to help by sending him details of suspected cases. He also wants to encourage community groups to plant new trees.

Mr Laidlaw explained: “As young trees take so long to make an impact, the best solution is to start planting replacement trees as soon as possible – species that generally do well in our landscape such as Oak.”

A new grant programme is being launched in the Borders soon to encourage community groups to do their bit.

Mr Morgan will work closely with the commission’s south of Scotland conservancy team, which, together with Tweed Forum and Borders Forest Trust, to develop the new ‘Borders Tree Planting Grant’.

The grants, limited to £1,000 per application to cover material costs, will be available to community groups soon.

It is hoped the funding will encourage the planting of small clumps of mostly native trees and hedgerow trees in the Borders.

Derek Robeson of Tweed Forum said: “We are making this grant application process as simple as possible, and payments based on receipts and photos.

“We are also keen to visit the site to assess suitability, which will give us a chance to help the applicant plan for a staged approach over the next few years.

“We hope that if this project is quickly taken up, we can attract a lot more funds in future years to help strengthen the landscape structure, especially towards the east of the Borders where chalara is very evident.”