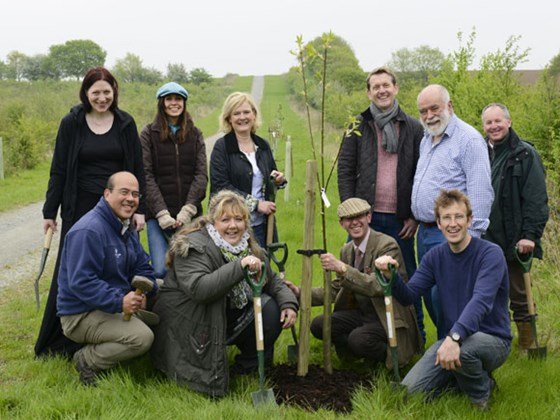 The judges of the 2013 Man Booker Prize for Fiction were recently reunited in their last official duty, as they planted trees in Hainault Forest with the Woodland Trust.

In contrast to their meetings during last year’s prize, this gathering saw the group donning their wellington boots and picking up spades to plant 13 saplings in the heart of what was once Henry VIII’s royal hunting forest. These trees will become a living commemoration of the ‘Booker Dozen’ – the 13 titles longlisted for the 2013 prize.

They will be the sixth judging panel to take part in the prize’s ongoing collaboration with the Woodland Trust, providing a symbolic gesture to compensate for the trees felled in order to produce the hundred-plus books submitted for the prize each year.

Ion Trewin, Literary Director of the Booker Prize Foundation, who joined the five judges said: “Printed books use wood pulp. By planting a grove of trees each year the Man Booker judges are putting something back.”

Hainault Forest is a designated Site of Special Scientific Interest (SSSI), which is being extended by the Woodland Trust to an additional 53 hectares of land. This former hunting forest was created to provide venison for the King’s table in medieval times and is home to large oaks, hornbeam and ash pollards.

Laura Judson, Woodland Trust Head of Regional Development, said: “Our trees and woods have provided inspiration for countless creative works over the years. It’s critical that we protect irreplaceable ancient woods like Hainault Forest, which cover just 2% of the countryside, to provide stimulation for future generations of writers.”

The Trust recently launched a campaign urging Government to increase protection for ancient woodland across the UK, the charity has already received support from over 45,000 members of the public.

For further information about the prize visit www.themanbookerprize.com