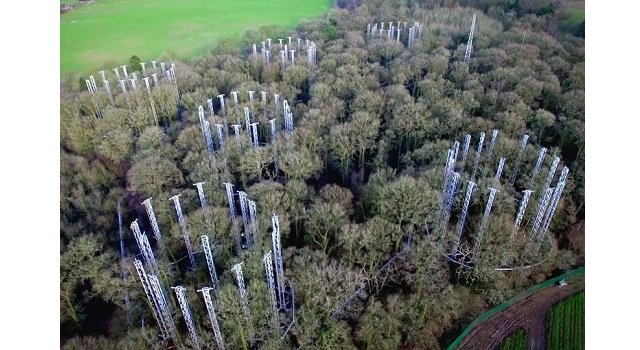 A pioneering research project looking into the effects of carbon on the planet has been crowned the RICS West Midlands project of the year – one of three University of Birmingham schemes to win awards.

The Birmingham Institute of Forest Research is housed in remote historic woodland near Stafford with aim of being at the forefront of research into CO2.

It is said to be the only one of its kind in the UK and will simulate the atmospheric conditions expected in 2070.

Investigating the effects of climate change on existing woodlands, the facility comprises a series of cylindrical ring structures, reaching just above the tree canopy, with supporting pipes delivering CO2 in such a way that the woodland inside the ring is immersed in CO2.

The University of Birmingham project will test the resilience of a mature forest in a high-carbon future.

Having won the infrastructure prize, it was chosen from all eight category winners to be crowned overall West Midlands project of the year.

Judging panel chairman Gurdip Chamba said: “This project only has a small physical footprint but has national and global significance.

“When 60 per cent of the world’s carbon comes from construction, we need to not only look to reduce our footprint but understand the effects increased carbon will have on the planet.

“This intricately planned, sensitively executed research scheme will assess the impact of CO2 on our forests for years to come.

“Projects that can nudge political thought on such important subjects are few and far between and the empirical evidence this could provide could be as significant as the CFC research that looked to repair the ozone in Antarctic.”