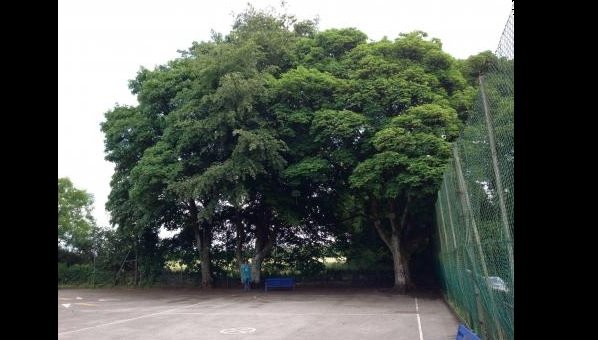 A meeting was held this week by Cotswold District Council’s appeals committee to discuss objections raised by a school over a tree protection order.

Staff and governors at Birdlip School claim the trees, subject to a temporary tree protection order, are damaging the area and could be a danger to the pupils.

Vice-chairman of the governing body of Birdlip School, Harriet Saunders brought a hefty fallen limb from the tree to demonstrate the danger it could cause.

Gesturing to the branch she said: “This branch came down in half term when, luckily, nobody was around.”

Headteacher Sandra Wride explained that high winds in Birdlip, which is at an elevation of almost 900ft, could potentially cause more branches to fall.

Adding to the case Harriet explained that the trees caused drain blockages, tripping hazards due to roots and resulted in slippery mud that teachers did not have time to clean up.

Finally Harriet stated that there was absolutely no chance of a new shelter being erected to replace the tree’s shade as some supporters of the order had suggested.

After listening to the comments from staff from Birdlip school and further details from Sharon Townsend on behalf of the village hall committee tree officer Mark Berry insisted that the trees were suitable for a tree protection order and that the problem was the weathered drainage system.

The Committee opted to undertake a site visit and will reply to the objection within a week of the visit.

Three objectors to the order attended to speak against it but there were no supporters.