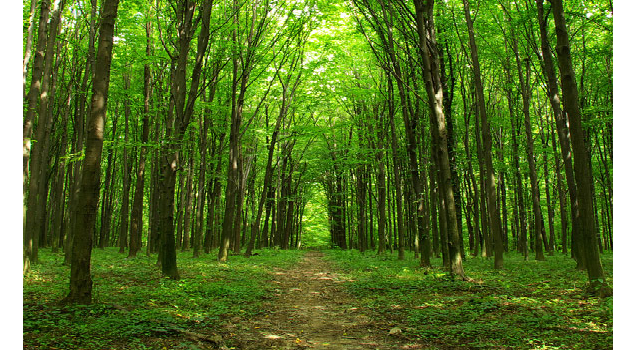 A DEADLY tree disease with no known cure has taken root in one of the district’s most picturesque beauty spots.

A Government agency has placed a containment notice on part of the St Ives Estate country park in Harden, near Bingley, after it was hit with an outbreak of Phytophthora Ramorum – known as Sudden Oak Death.

The fungus-like pathogen causes gory cankers which ‘bleed’ a dark red or black ooze from holes in the trunks of infected trees.

It has been spreading through the UK on airborne spores since 2009, but this is the first time it has hit our district’s countryside.

Bradford Council, which owns the estate, is now removing infected rhododendron plants, which act as hosts for the disease, and either burning or burying them in a desperate bid to stop the disease from spreading.

Visitors are being asked to stick to paths, keep dogs on leads and avoid taking home pine cones or other plant matter, but Pam Laking, chairman of the Friends of St Ives, said she feared they were “fighting a bit of a losing battle”.

She said: “The spores can be transferred on shoes, on our clothes, or on our hair. It can also be transported by fir and feathers.

“We have got a lot of deer up there, as well as badgers and foxes. We are a bit doomed, but at least we can try to make sure humans are not spreading it.”

Mrs Laking said she particularly feared for the fate of the country park’s ancient oaks, many of which are rare foreign specimens originally planted by the estate’s former owners, the Ferrand family.

She said the larches which make up the estate’s picturesque Betty’s Wood were also particularly susceptible, so if it spread there it could decimate the wood.

A spokesman for the Food and Environment Research Agency, which imposed the containment notice, said: “This is the first finding of infection with Phytophthora Ramorum in the Bradford area in ‘wild’ rhododendrons in a woodland setting.

“The disease has been found in garden centres in Bradford in the past, but in each of these situations the infected plants have been immediately destroyed.”

He said: “We realise this will be a hard task and ask that those who come to visit St Ives help us with this by following a few simple rules.”