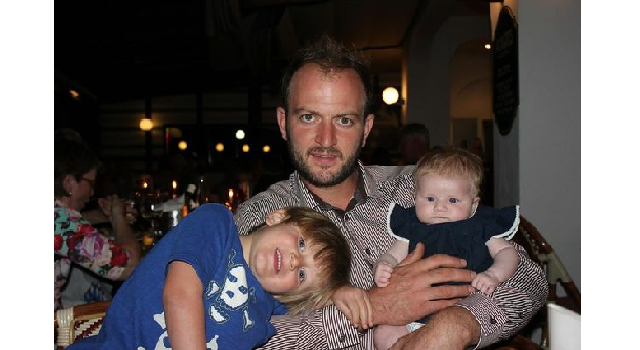 A major fundraising drive is underway to help the young children of a Huddersfield man tragically killed at work.

Tree surgeon Martin Hanks from Thurstonland near Holmfirth died in the accident and family and friends have rallied round to raise money for his children aged one and four and also for the Yorkshire Air Ambulance which was sent to the scene of the tragedy.

He left behind a wife, Emma, four-year-old Lucca and one-year-old Esme.

This month 40 of his friends will tackle a 200-mile ride to Scarborough and back, raising money for the Yorkshire Air Ambulance and a Trust Fund for Lucca and Esme. The riders aim to raise £10,000.

Many of the riders have not cycled since they were young. They will ride from Martin’s local pub in Thurstonland, the Rose and Crown, to his family’s favourite Yorkshire holiday place – and back.

It’s aptly named the Coast to Roast with a Yorkshire sop roast dinner waiting for everyone when they return to the pub after 200 miles in the saddle.

The campaign has raised more than £5,000 so far with donations from local businesses.

John Davies-Riand, a friend and neighbour of Martin’s and Coast to Roast organiser, said: “Martin was a big-hearted family man and loved by everyone that met him in an instant.

“He was a proud Yorkshireman and the centre of many people’s lives. He was taken from his family and friends far too early while doing the job he loved and the Coast to Roast ride is a little something his friends are doing in his honour.

“We’re hoping to split the money raised with half going to a Trust Fund for his two young children to give them a good start in their lives after education or for university.

“The other half will be donated to the Yorkshire Air Ambulance which attended Martin’s accident within a matter of minutes so they can continue to help save someone else’s daddy or loved one’s life in the future.

“Some of us haven’t ridden a bike since we were teenagers so this is going to be a tough challenge, but the money raised will go to two brilliant causes and we hope to smash the £10,000 target.

The ride is taking place on the weekend of September 19 and 20, starting at the Rose and Crown at 7am.

John added: “Martin’s banter was priceless, his energy infectious, his morals true and love for his family and friends unquestionable.

“The pain of his death will last with us forever which is why we’re hoping to create a positive memory of him with this fundraising cycle ride.“

Donations can be made online by going to the two separate fundraising pages. To donate to Lucca and Esme’s Trust Fund, click here, and to donate to the Yorkshire Air Ambulance, click here.

The crowdfunding page will expire on September 20.