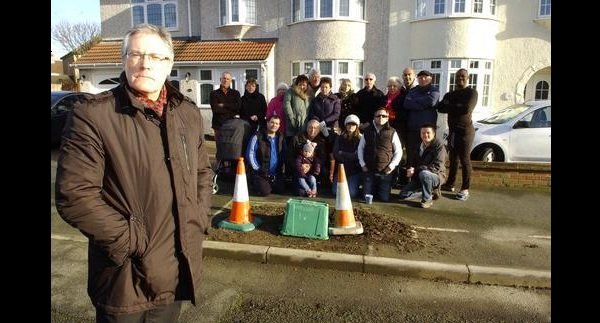 Residents of a road in Bexleyheath are “very angry” at the council for refusing to replant their chopped-down trees – instead demanding they pay £230 per tree if they want them replaced.

Three large trees in Berkeley Avenue were cut down last year because of safety concerns – two had been loosened after the winter storms and one became diseased.

While residents are desperate to have them replaced, Bexley Council has refused to do so until 2018, citing budgetary constraints.

Instead it has offered locals a ‘Sponsor-A-Tree’ scheme, costing £230 per tree.

David Webb, 65, said: “I think residents thoughts are really that it is just crazy. I am paying my council tax, what am I paying for?

“Everyone I have spoken to has been very angry and upset.

“These trees are such an important part of our everyday life.

“The council is leaving a patchwork of non-replaced trees. It has made the road look bare.

The Bexley Council website reiterates the importance of trees in urban areas, saying, among other things, they improve air quality, support wildlife and reduce mental fatigue and stress.

Despite this, while Bexley has a high level of green space in comparison to other London boroughs, it came 31st out of 33 boroughs for street trees per km in a survey from 2011.

Mr Webb, a design engineer, added: “If this continues then it could lead to a decrease in property prices in the borough.”

A Bexley Council spokesman said: “It was with great reluctance that the council had to adopt a policy of not funding the replacement of trees once they have died, been cut down due to disease or to be made safe.

“However, the council appreciates that trees are important in enhancing the borough and that they bring with them a sense of well-being and happiness for many residents.

“That is why the Sponsor-A-Tree scheme has been introduced.”