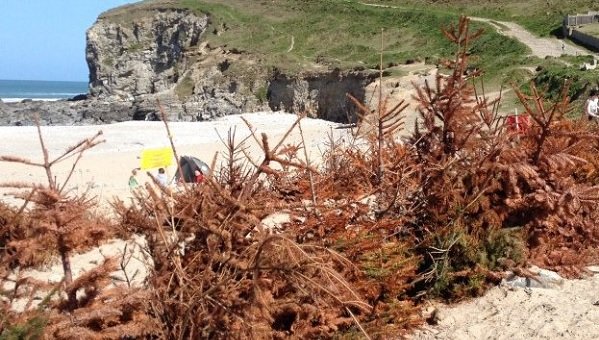 Some dead Christmas trees planted on a beach in Cornwall in a bid to prevent erosion are to be removed after criticism of the scheme.

About 100 trees were set in sand at Porthtowan in the hope that dunes would form around them.

A community group said the move failed to create any dunes and the sight of the trees was damaging tourism.

Cornwall Council said it would reduce the number of trees and partially bury those being kept.

The trees were planted in January, with Cornwall Council claiming they would act as wind traps allowing marram grass to grow and hold sand together.

Residents were told the trees would be covered with up to 2m (6ft 6ins) of sand. But, by the start of the holiday season, rows and rows of dead conifers were still sticking out of the ground.

Members of the Porthtowan Dunes Community Group had planned to remove the trees which they described as an “eyesore”.

However, the council said it would take action against the group if they did “to prevent such unauthorised interference” as the trees were on land owned by the Liberal Democrat/Independent-led authority.

The council said it will remove all but two rows of trees, which would be packed into a tighter area and partially buried.

It said: “These actions look to continue to protect the vulnerable front of the dune by utilising some of the Christmas trees in a few tighter packed rows covering a smaller overall area of the dune.

“The trees will be partially buried but with some left above the ground to continue to trap wind blown sand and to help to protect and enhance the area as an important natural sea defence.”