Battle goes on to save ancient tree at Silsden supermarket site 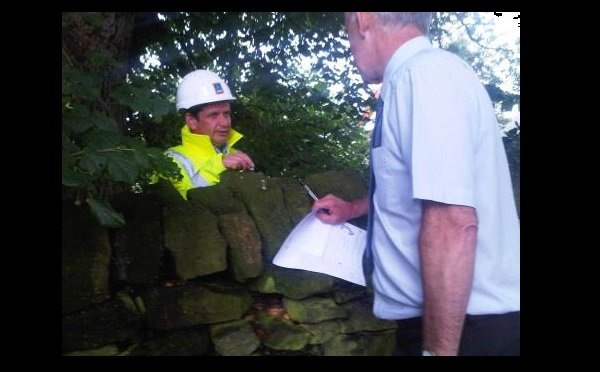 Staff at the Ecology Building Society, Silsden, successfully delayed chainsaw-wielding workmen who attempted to fell an ancient tree on the site of new Aldi store yesterday.

The supermarket giant has planning permission to remove the massive lime tree, now thought to be 250 years old, from the site off Keighley Road.

But workers at the green-minded building society are fighting to overturn that approval granted by Bradford Council and are appealing to Aldi to change its plans at the last minute.

And yesterday they vowed to keep constant vigil beneath the tree which borders their property after contractors began hacking at its lower boughs.

Workers stood beneath its branches and hugged its trunk thus creating health and safety issues for those keen to cut it down.

During the day they desperately tried to persuade Aldi to stay the axe during ground clearance work prior to building on the Keighley Road site, said EBS ethics manager Anna Laycock.

“We have challenged them on every front and taken every action that we can,” she said.

“An we’ve been absolutely overwhelmed by support from local residents and also people on-line.

“People have been messaging us – and Aldi – from all over the country saying please don’t cut the tree down.

“Sadly the only response we have had so far from Aldi is that they are doing is legal – but that doesn’t make it right.”

One fresh issue raised yesterday was the possibility that while Bradford Council planners had approved removal of the once-protected tree, that was subject to final approval of landscaping plans scheduled to be discussed on August 25.

“Aldi have said they will send us a document which says either that the landscaping plan has already been somehow approved or that they can remove the tree regardless,” Miss Laycock said.

“We shall see what tomorrow brings,” she said.

An Aldi spokesman told the Telegraph & Argus: ““We are carrying out our development in line with the approved plans.

“There will be a significant replanting scheme within the site, prior to completion of the scheme”.

And Coun Val Slater Bradford Council’s executive member for housing, planning and transport, said: “The removal of the tree was allowed following the grant of planning permission by Committee. The Tree Preservation Order still stands on a number of other trees on the site.

“One of the conditions of planning application being granted was that the new landscaping of the site would include the planting of a semi-mature lime tree close to the position of this tree.”