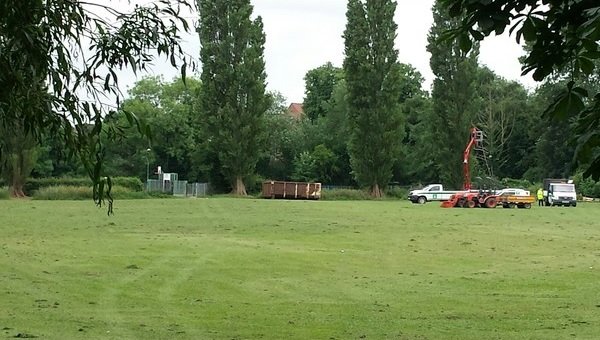 The line of poplars alongside the public footpath on the Asda side of the park has been deemed unsafe following a Notts County Council survey of their condition.

A willow tree will also be ‘pollarded’ – cut back but allowed to re-grow.

The affected trees border a footpath near the skate park and are thus classed as a risk to the highway. They are believed to be at least 70 years old.

Ongoing footpath closures are in place today and on Monday so that work is completed before the Kings’ Park Gala event next weekend.

A poplar from the same row blew over in high winds back in December, fatally injuring 83-year-old John White, who was riding his mobility scooter through the park at the time.

Council officers have confirmed that some of the trees currently being felled are actually in a worse condition to that which struck Mr White during the winter storm.

The poplars were showing signs of decay and will be replaced in due course by more appropriate species.

“It is an opportunity to get some new trees and we will see which species are suitable,” said a Bassetlaw Council spokesman.

There will be ongoing footpath closures until 5pm today and a complete closure of the walkway from 9am -5pm on Monday.