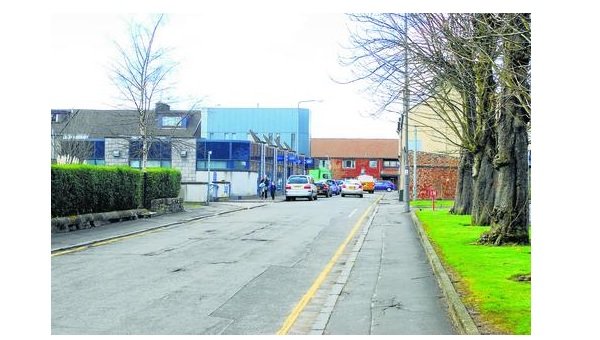 Rot forced East Renfrewshire Council to chop down an avenue of iconic trees on one of Barrhead’s oldest streets.

Bank Street, and accompanying Lowndes Street, have long been famed in the town for their rows of massive and old Horse Chestnut Trees.

However when one of the trees snapped in high winds and fell into the side and damaged the former council tax building, now the temporary library, on Lowndes Street, council workers discovered that the famous trees were rotting from the inside out.

A fungus had infected the tree, and destroyed its internal heartwood, killing the 30 foot high plant. However, an investigation by East Renfrewshire Council’s Arbroricultural Officer, Andrew McCloy, revealed that the rest of the trees making up the leafy avenue were also suffering from the same rot.

The report read: “Once on site I could clearly see other health and safety issues with remaining trees running along the grass verge. “The trees are all mature Horse Chestnuts, approximate height between 25-30 feet tall. “The stress and structural weakness within the crowns of the remaining unhealthy tees will ultimately lead to failure.”

Five of the remaining Horse Chestnuts were found to be in poor health by the officer, with visible signs of internal heartwood decay, multiple open wounds and cavities on the trunk of the tree and he also identified structural weaknesses in the branches of each. He added: “We can not and do not rake the risk on leaving these trees as they are a high risk failure.”

The trees were planted in the 1800s to create an avenue for the large houses that surrounded Bank Street and Lowndes Street. The trees also continued down Arthurlie Avenue, with many of them still visible today.