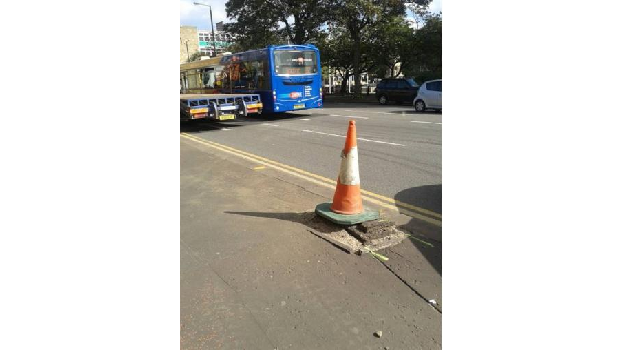 Council chiefs have defended their decision to chop down trees on one of Keighley’s busiest main streets.

They say the trees felled to make way for new paving on historic North Street were old and in very poor condition.

But campaign group BANDAG, who alerted the Keighley News to the trees’ removal, claim they appeared to be healthy and “still in the green”.

The clash came after a passer-by spotted council workmen removing one of one of the trees, outside Barclays Bank, early in the morning last week.

BANDAG member Barbara Archer said: “The tree fell into the road and traffic was then allowed to manoeuvre around it whilst workers moved in to cut it up for disposal.”

Mrs Archer demanded to know whether there have been consultation about the “shocking” destruction of the trees, near the junction with Cavendish Street, and whether replacements would be planted.

She added: “Is there an intention to make the town centre sterile and unattractive to any living creature other than people?”

Keighley group BANDAG campaigns on a range of environmental issues, including the reopening of blocked public footpaths, and discouraging new housing developments on greenbelt land.

A Bradford Council spokesperson said the areas of North Street where the trees were felled were within the Keighley Townscape Heritage Initiative (THI) area.

Council and lottery cash is being used to bring buildings in the THI area back to their Victorian and Edwardian glory.

The council spokesman said: “These stretches of pavement are being laid in stone flags and only the trees that were old and in very poor condition were felled as part of the project.

“Healthy trees have been retained and will be incorporated into the paving scheme.”