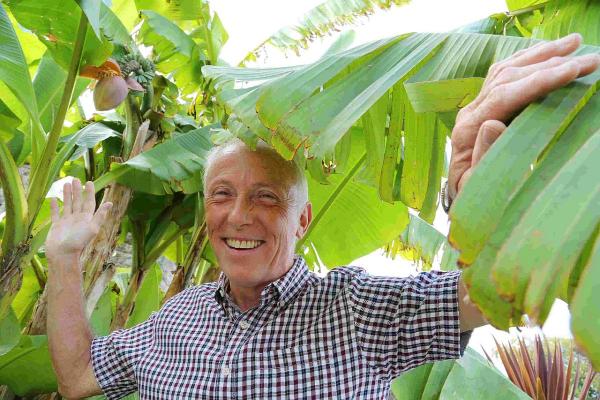 KEEN gardener Martin Jones has been growing banana trees in his Swanage garden for the past decade – but he never thought the Purbeck climate would prove quite this fruitful.

Swanage may be a long way from the hotter climates best-suited to the popular fruit, but nonetheless Mr Jones has managed to cultivate Musa Banjoo fruits – known as Japanese bananas.

Unfortunately, unlike its popular yellow bendy cousin, the seeded fruit is pretty much inedible.

Mr Jones, of High Street, Swanage, explained: “I have never heard of anyone else growing bananas locally.

“I first noticed them last month, when I was making a phone call by the patio. It was one of the biggest surprises I’ve had in years.

“I was just stood chatting – then I suddenly thought, I just don’t believe what I am seeing here.”

The 60-year-old, who runs a dive charter business in Swanage, believes the mild winter is the reason for his unlikely harvest.