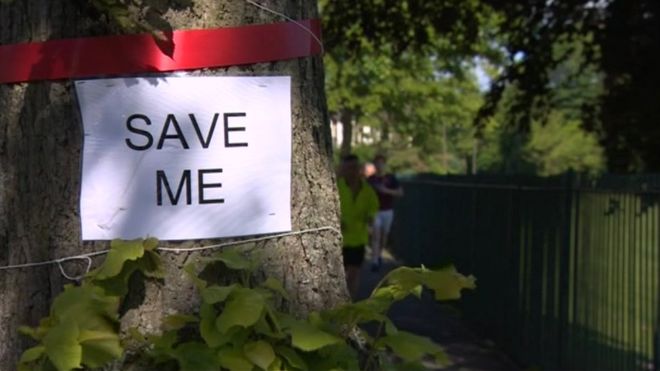 The BBC has reported that the High Court has overturned a ban on chopping down trees in Sheffield.

Campaigners applied for a temporary injunction which resulted in Sheffield County Council being ordered to stop felling trees in February.

Mr Justice Gilbert lifted the order last week and is expected to hand down his final judgement next month.

The council said it would not implement its full felling scheme until the ruling.

Sheffield Tree Action Group (Stag) said it was disappointed by the news.

Executive director Simon Green said: “We are delighted that the court has agreed with the council’s case to have the tree injunction lifted.

“However, we have been clear throughout that we want to make sure that our work with communities on this issue is right, so we will not resume the full street tree replacement programme until we have had the court’s final decision.

“We will of course continue to assess our trees and replace those that are dangerous.”

Campaigner Dave Dillner, from Stag, said he retained “a measure of confidence” over the High Court’s final decision.

“It’s absolutely not the end of the campaign. We wait with interest Mr Justice Gilbart’s final judgement,” he said.

The Labour-run council launched the scheme to remove dead and dangerous trees from the roadside.

It planned to remove and replace about 5,000 trees in total and has so far replanted about 3,600 trees.

Former Lib Dem leader Nick Clegg previously called on the council to abandon the programme and described it a “national scandal”.

To read the full story, please visit the BBC website by clicking here

Image courtesy of the BBC