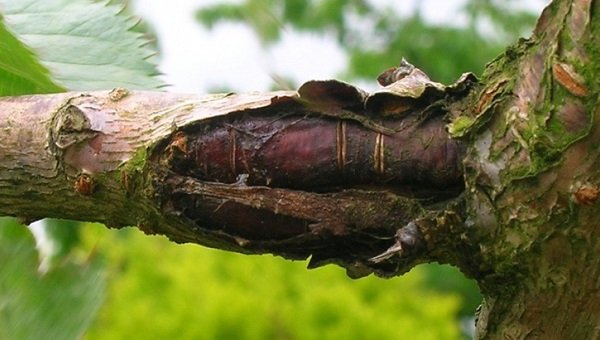 Whilst pruning fruit trees, it is advised to prune diseased and dying wood to prevent pathogen attack progressing and create a clean healthy crown. This can include branches with cankers which are generally caused by the bacteria Pseudomonas syringae pv. morsprunorum and/or P. syringae pv. syringae.

Bacterial canker, also known as shot-hole of Cherry, attacks many trees but is most commonly found on Prunus species such as Cherry and Plum. The disease is prevalent in the UK and Ireland, and usually occurs as spreading lesions or cankers on trunks and scaffold limbs of young, vigorous trees. It is particularly prevalent on sweet and autumn flowering cherry trees. Copious amounts of gum are normally associated with active cankers, but gumming is not always a positive indication of this disease.

The disease attacks most parts of the tree, with cankers mainly occurring on trunks, limbs and branches during late spring and summer. Leaves on affected limbs and branches may wilt and die in summer or early autumn if girdled. Occasionally, whole large scaffold limbs dieback.

‘Shot-hole’ refers to the leaf symptoms this disease can cause, which tend to be dark brown, circular to angular, and sometimes surrounded with yellow rings. These may merge to form large patches of dead tissue especially at margins of leaves. The centers of the necrotic spots may drop out, resulting in the distinctive shot hole symptoms shown in Figure 1. Early leaf drop then generally follows.

Lesions on fruit and fruit stems are similar, but are often brown with a margin of wet or water-soaked tissue, which create deep, black depressions over time in the fruit surface.

Infected leaf and flower buds may fail to open in spring, resulting in a condition referred to as “dead bud”. Small cankers often develop at the bases of these buds. Other infected buds open in spring but collapse in early summer, leaving wilted leaves and dried-up fruit. If blossom infection occurs, whole blossom clusters collapse as infection spreads into the fruit-bearing spurs.

The bacteria can survive by overwintering in bark tissue at canker margins, in seemingly healthy buds and within the tree vascular system. Bacteria multiply within these overwintering sites in the spring and are spread by rain splash to blossoms and young leaves. After leaf drop in autumn, the bacteria may enter the tree through fresh leaf scars. Outbreaks of bacterial canker are often associated with prolonged periods of cold, frosty, wet weather late in the spring or with severe storms that injure the emerging blossom and leaf tissues. Freezing can weaken the tissue to infection, but infection depends on the presence of wet weather during the thawing process. Free water on leaf surfaces and high relative humidity are required for at least 24 hours before successful leaf infection can occur.

Pruning should be carried out in the summer during dry weather, as infection of the branches occurs in autumn and winter. Cankered limbs should be pruned out well below visible canker. Sterilizing pruning tools before pruning healthy wood or trees can help to reduce the chance of spread.

Copper-based products are available for the control of these bacteria. Complete eradication is difficult due to the nature of the disease and its ability to infect and multiply in the vascular system, often unreachable by traditional spray methods. Preliminary research in the US and Australia indicates useful control of bacterial canker can be achieved using certain plant defense activators as part of a fertilisation regime and so are suggested to aid in the suppression of bacterial canker.