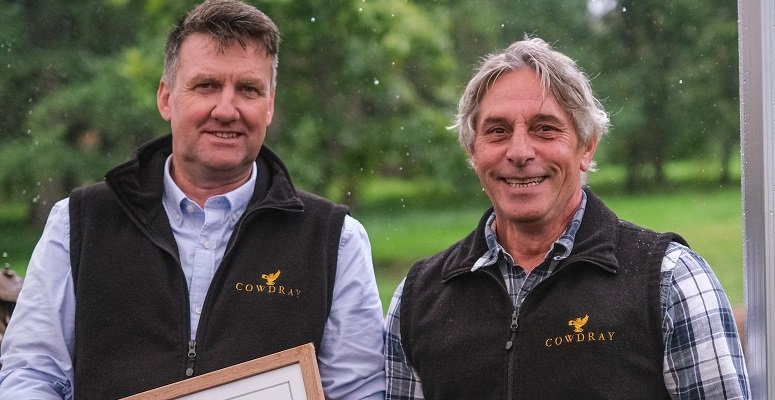 Two foresters who have been the backbone of Cowdray Estate’s forestry team for more than 30 years have been presented with Royal Forestry Society Long Service Awards.

Pictured, above, from the left, Gil Bates and Paul Prudente both joined the Estate near Midhurst in West Sussex in 1989 shortly after the 1987 storm and just before the 1990 storm.

Much of the work they were first involved with was clearing of windblown trees and replanting the cleared areas.

Nina Williams, Head Forester at Cowdray, said: “Paul and Gil have been the backbone of the Estates harvesting team for years. They have turned their hand to everything from first thin conifer to 150 year old oak felling.

“They have seen many changes on the Estate over the years but have been adaptable in their roles making them invaluable members of the Estate team.”

Gil followed his father Mick into the Woods Department at Cowdray. He has spent most of his career at Cowdray harvesting timber. Initially this was first and second thinnings. More recently he has focused on specialist large timber, mostly oak and Douglas fir, as well as planting.

Gil says: “Over the years it has been fascinating to watch plantations that I helped to establish after the storm mature. Most have been thinned once or twice and one has even been clearfelled! It has been great working as part of a great team of people helping to deliver this work.”

Paul also initially joined the harvesting team but latterly has been involved in planting, establishment and machinery operations.

He says: “I have seen a lot of changes on the Estate over the years and feel very fortunate to have worked with a great team of people in and interesting and varied role.”

The Long Service Awards were presented by Royal Forestry Society Immediate Past President Sir James Scott at a meeting of the RFS South Eastern Division at Cowdray.

Cowdray Estate is a mixed rural Estate in West Sussex covering 16,500 acres of which a third is woodland. The woods are a diverse mix of conifers and broadleaves and are managed primarily for the production of high quality timber as well as environmental and social benefits.