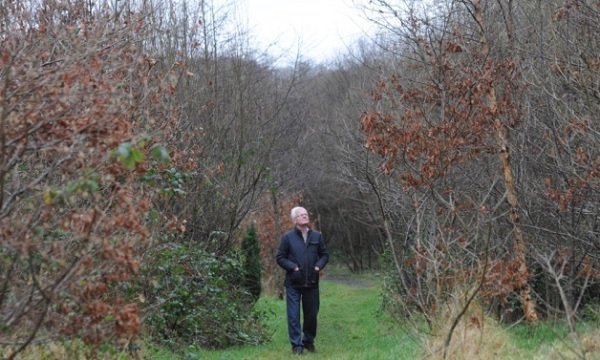 On the second anniversary of its arrival in the Province, a feared and lethal tree disease continues to threaten “the face of our landscape” according to one expert.

On November 2012, the first report emerged that ash dieback disease had been uncovered in Northern Ireland, following outbreaks in the Republic and the mainland UK.

Ash is an extremely numerous tree species in the Province, plays a vital part in the Province’s hedgerows, and the incurable disease is understood to have had infected 90 per cent of Denmark’s population of the species.

Patrick Cregg, director of the Woodland Trust, said despite efforts to battle it it remains a “significant threat”.

To date, it has been found in all six counties, and the number of confirmed cases stands at 93.

However, Northern Ireland is the only part of the British Isles where the disease has not been found in the wild.

Instead it has been concentrated only in young, newly planted saplings which had been imported from Europe.

These have all since been destroyed.

In addition, the number of discoveries of the disease has dropped dramatically – out of 830 inspections in 2014, only another two cases were discovered.

Although this may appear to offer a glimmer of hope, Mr Cregg said: “To date we have no confirmed cases of ash dieback in the wider environment in Northern Ireland.

“While this is good news, we cannot become complacent.

“As there are hundreds of confirmed wider environment cases across the UK, and some now in the Republic of Ireland, it is extremely likely that the disease will spread.”

He commended the Department of Rural Development’s efforts to curb it, but said: “This disease poses a serious threat to the species and has the potential to change the face of our landscape.”

Any place where the disease has been found so far, the Forest Serivce will survey a 500-metre perimeter around it to see if the sickness has spread.

Asked if the disease would inevitably spread to the wild in Northern Ireland, Forest Service director Stuart Morwood: “One can’t say that it’s inevitable.

“All one does is one looks at a scenario in Europe and in GB where there certainly has been quite significant and rapid spread.

“We may have got it at an early enough stage but it is still too early in progression of the disease to be absolutely certain.”

He added that ultimately “the jury is out” over the question.

Prior to the discovery of ash dieback in Northern Ireland, the Province had continued importing up to 150,000 ash saplings annually from continental Europe where the disease had been rife.

Weeks before it was found in Northern Ireland, the authorities moved to ban imports.

By July this year 86,000 trees had been destroyed in Northern Ireland, with DARD paying out £35,500 to private woodland owners to destroy and dispose of infected trees.

The Forest Service estimates the value of trees affected by the disease – caused by the fungus chalara fraxinea – to be £34,400.