Ash Dieback could see 5,000 Nottinghamshire trees for the chop 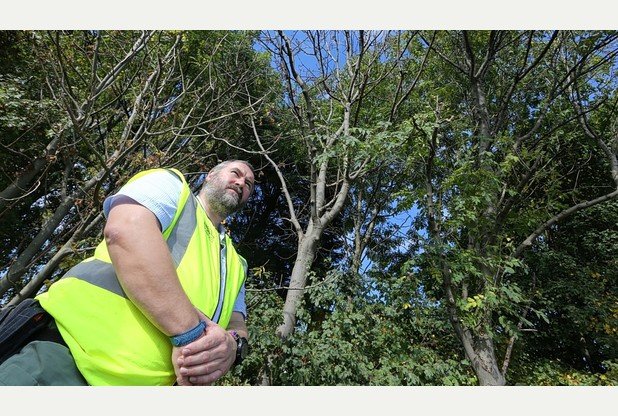 Up to 5,000 trees along Colwick Loop Road may be cut down after Nottinghamshire’s first case of ash dieback disease was discovered on the route.

The county council is seeking approval for £500,000 from the transport and highways committee to tackle the problem – which it says will mean 80 per cent of trees on the A612 being felled.

Forestry manager Dave Simpkin said it would cause “a considerable impact” on the road, where gaps would be created – stopping the trees screening some houses from the industrial estate on the other side.

But he insisted the disease needed to be stamped out.

“The genie is out of the bottle,” said Mr Simpkin. “The spores that carry the disease are airborne, so it has simply been a matter of time.

“In the next three to five years, we expect between 30,000 and 40,000 trees will be affected but these are just ones looked after by the council. There will be plenty more in private areas that will need to be dealt with.”

The council claims there is a backlog of work when it comes to tree maintenance, as budget constraints and rising costs mean only basic safety work has been carried out – at a cost of £465,000 for the 167,000 tress it is responsible for.

This has led to overgrown trees blocking road signs and reaching vehicles, cyclists and pedestrians. But the diseased trees are a main priority to stop the spread to other plants and to prevent them becoming unsafe – with the risk of branches falling down and injuring drivers and pedestrians.

Dr Markus Eichhorn, a lecturer in ecology at the University of Nottingham, said: “It was inevitable after spreading through a lot of the UK and across Europe that it would end up here. We can’t develop a treatment for it at this stage, so the rationale behind cutting the trees down will be to stop the spread – and for safety, to stop it falling on anyone when the tree dies. If the disease is wind-dispersed, there is nothing we can do to stop it.”

The council also wants to use the cash to carry out tree maintenance on the A611 through Annesley Forest and the A38 Sutton-in-Ashfield bypass.

The committee meets on Thursday to decide.