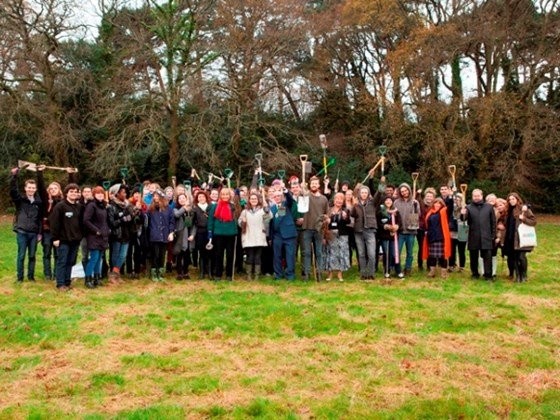 The arrival of new students at a local university has been recognised by planting trees, as part of a new initiative to help make Bournemouth a greener place to be.

1,000 trees were planted at Slades Farm this week (Tuesday 9 December) to not only represent new students at Arts University Bournemouth (AUB), but also provide a wooded area for local people to enjoy, and wildlife to flourish.

They were put in the ground by a number of students and employees from the University, and representatives from the Woodland Trust, Slades Farm Community Garden Project and BBCSF (Bournemouth Borough Council at Slades Farm), as they all mucked in at the event. Even the Mayor of Bournemouth, Councillor Chris Mayne, arrived to help on the day.

Partnership with the Woodland Trust

It marks the start of a three-year partnership with the Woodland Trust, the UK’s leading tree and woodland conservation charity, where 3,000 trees are being planted during annual events to represent new students that join each year.

The project also allows AUB to contribute towards the Green Impact Students’ Union scheme, a programme that awards universities for their environmentally-friendly practices, such as recycling and reducing energy use. AUB have already been awarded a Gold rating for its efforts so far.

Dan Broadbent, AUB Students’ Union President said: “We decided to embark on this project to help offset the carbon footprint of each new student, and work with other organisations to improve our surroundings. It was great fun planting the trees, and I hope other universities, schools and businesses are inspired by our efforts to reduce their own environmental impact for future generations.”

AUB Principal and Vice Chancellor, Professor Stuart Bartholomew said: “I am pleased the Students’ Union is translating concerns for the environment into actions. Whilst they may be small, they are personal and illustrate the creative ways in which students contribute to the local area.”

Hamish Thomson, Woodland Creation Adviser at the Woodland Trust, said: “The Woodland Trust is delighted to be involved with AUB’s project, and we’re looking forward to working with them over the next few years.

“Currently the UK has significantly less woodland cover than the rest of Europe. Local tree planting initiatives help the Woodland Trust work towards its target of doubling the amount of native woodland, and what better way of doing this, than by planting and dedicating trees to people, such as new students at AUB.

“This week’s event was a great success – and on behalf of everyone at the Woodland Trust, would like to congratulate those taking part on their tree planting efforts.”