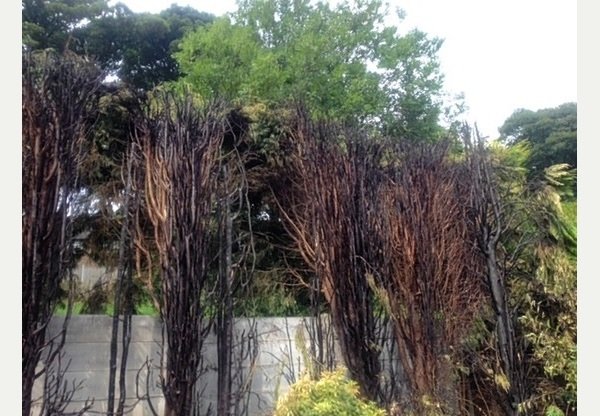 Firefighters have e asked police to find arsonists who started fires in two gardens the early hours of the morning.

Fire crews from Newcastle were called to Redheath Close and nearby Underwood Road in Silverdale at 5am yesterday following reports of a number of conifers being set alight.

Now residents have spoken of their shock after witnessing the incident.

Pensioner Kath Burton, aged 75, of Redheath Close, said: “I was woken at 5am in the morning by my neighbour who told me the conifers in my garden were on fire. I couldn’t believe what was happening.

“I looked out of my window and the top of the conifers were well alight. It was very frightening.

“My neighbour had called 999 and a fire engine came within minutes.

“It is lucky it didn’t spread to my neighbours’ houses because there is a big row of conifers behind all our homes.

“I am also glad it didn’t spread to my house and that my neighbour saw it in time. The fire has destroyed a number of things in my garden including some pot plants.

“I have had to call the insurance and they are looking to review the damage. The whole thing has left me feeling vulnerable.”

Neighbours Elizabeth and James Pugh dialled 999 after spotting the fire.

Elizabeth, aged 73, of Redheath Close, said: “The fire was well alight by the time we saw it. I have no idea how long it had been burning for.

“Our other next-door neighbour spotted the fire first, as he had woken up for work. It is a good job he saw or it would have most likely spread to the other houses.

“There is a walkway behind our houses so I think that is where the people would have been to start the fire.”

He said: “We have passed the information of these incidents onto the police to investigate.

“We are currently running our Flames Aren’t Games campaign in a bid to reduce the number of small outdoor fires which tend to increase during school holidays.

“What people need to realise is that arson is a serious crime which could have a devastating impact on people’s employment prospects should they face prosecution.”