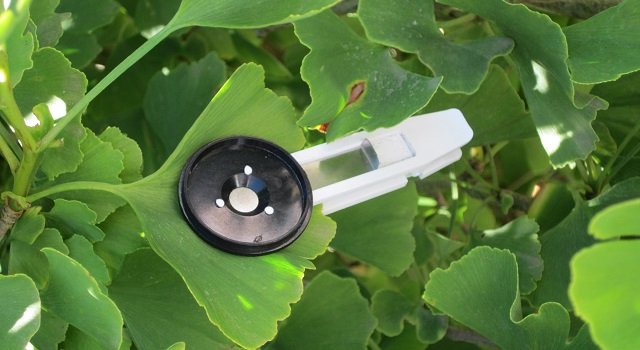 Barcham Trees recently held a workshop for its staff on the Arborcheck Nursery Benchmark System for Vitality Monitoring and Stress Detection, developed by Hansatech Instruments Ltd in conjunction with the Cambridgeshire Nursery and Bartlett Tree Research Laboratory. It is based on data relating to tree health gathered independently at Barcham by Bartlett and measured by Hansatech’s chlorophyll fluorescence measuring systems.

Chlorophyll fluorescence is the process whereby leaves disperse excess energy from the sun which cannot be used, and is inversely proportional to the amount of light being used for photosynthesis. The Arborcheck system measures chlorophyll fluorescence emissions from the leaves of a tree and compares the measured values with the benchmarks for the same genus, species or cultivar of trees tested at Barcham during recent years as part of the nursery’s intensive tree health and biosecurity programme.

Chlorophyll fluorescence provides a rapid, non-invasive and non-destructive method of detecting and measuring physiological performance of leaves, and is sensitive to numerous stress conditions such as low temperature, salinity, water and herbicide damage. Chlorophyll fluorescence is a tree’s first line of defence when under stress, and is an optical signal in the infra-red area, just beyond the vision of the human eye.

Paul Davis of Hansatech Instruments Ltd led the workshop. He showed Barcham staff how a tree has to be prepared so its chlorophyll fluorescence can be measured. Reusable leaf clips are carefully placed on leaves, avoiding veins, mid-ribs, holes and the like. In the demonstration 10 clips were placed around a Ginkgo biloba, and left for 15 minutes for the leaves being monitored to adapt to the dark condition imposed by the clip. The 10 clips provide a representative sample and can be placed randomly, whether in sun or shade, anywhere within reach.

A Chlorophyll Content Meter is used to determine the amount of chlorophyll present in each leaf. Ten readings are taken, which are then automatically averaged by the instrument. A Chlorophyll Fluorimeter is then used in conjunction with the leaf clips, which takes a one-second reading of the chlorophyll fluorescence emission. The fluorimeter connects via Bluetooth to an Android tablet, where the results are downloaded to the Arborcheck App.

On the day staff checked the Ginkgo the temperature was a very warm 31ºC, and while the readings showed it had good overall vitality, it also showed it was under significant physiological stress – more than likely due to the excessive heat. If results are not what you were expecting, Paul said it was important to look at the tree objectively to try and determine the possible problem. The great benefit of the Arborcheck system is it can highlight the presence of stress before it is visible, and it is often easier to remedy the problem at this early stage.

Also present at the workshop was Martin Theill Johannsen from a Danish company called Milford, based just outside Copenhagen. It represents Arborcheck in Scandinavia, where Martin is exploring markets. He told me there is no similar system in Denmark, and that he was in the UK to collect data and to see how Arborcheck is used on the Barcham nursery.