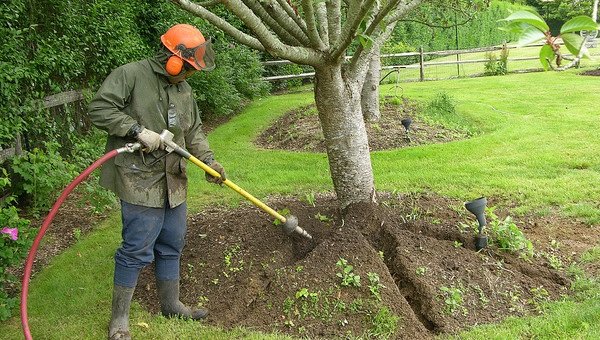 Have you been introduced to the Air-Spade? If not, where have you been! Many people closely associate the tool with arboriculture, and rightly so – the Air-Spade 2000 is recognised as an industry standard for most horticulturists, landscapers and tree surgeons – but that barely scratches the surface of the capabilities of the Air-Spade. As versatile as it is niche, as precise as it is powerful, the Air-Spade is a tool of many talents. Let us explore…

This is perhaps the Air-Spade 2000’s most recognised habitat. Effective for use amongst trees and shrubs, its applications are numerous.

Because of the intricacy of the task, the 2000 is widely used for tree root inspection, given its ability to disperse soil without causing any damage to the tree itself.

Radial trenching and soil aeration are important processes for oxygenating and hydrating roots to allow for optimum tree growth and health. By emitting pressurised air into the ground, the Air-Spade is instrumental in soil decompaction, which allows for more direct water and air supply.

Got a bigger task? Try the Air-Spade 3000. The big brother of the 2000 is the most powerful tool on the market, making short work of shifting dirt.

The Air-Spade is supremely effective at digging in controlled layers, which can be useful in many situations, especially when remediating environmental contamination. Used alongside a vacuum excavator, this is the safest way of removing contamination without exposing the operator to hazardous materials.

When it comes to de-mining, precision is vital. The option to change the nozzle size on an Air-Spade means the tool can be used at as little as 25cfm, meaning it allows the user to carefully and efficiently uncover buried land mines with pinpoint accuracy.

What else can the Air-Spade do?

Cleaning – Got a blockage? No problem! The Air-Spade can disperse blockages with ease, using a powerful dose of compressed air. From cleaning out animal feed silos to industrial sized factory tanks, the Air-Spade provides an effective solution to clogged-up apertures.

Art – Move aside impressionism, modern art is evolving. Artists are getting creative with compressed air and making masterpieces in landscapes. The earth is your canvas!

Tutex is the exclusive distributor of all Air-Spade products here in the UK. We believe that in an industry, and indeed a world, where safety at work has never been more important, the Air-Spade is the future.