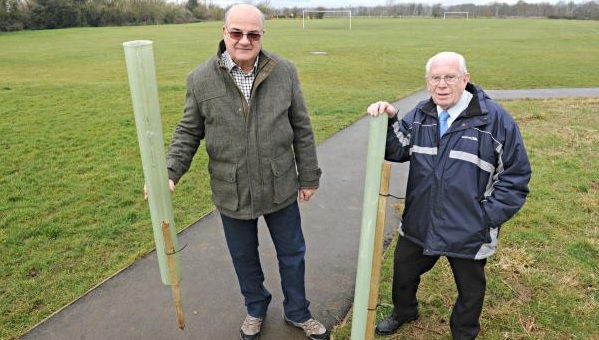 Selfish thieves in Cam stole 35 trees planted for the benefit of the town – some of which were being used to develop a woodland memorial area.

Cam Parish Council has expressed its annoyance over the theft of the trees which were planted by the Stroud Valleys Project.

An appeal has now been launched, with both Gloucestershire Police and the council asking for anybody with information to come forward.

The trees – including Silver Birches, Field Maples, Whitebeams and Mountain Ashes – were planted by the SVP in Jubilee Field, Cam, around the time of January 15, as part of the Big Tree Plant, a national scheme funded by the Forestry Commission.

Though the SVP used their funds to pay for the trees, which would have came to around £450, the council dished out for planting costs.

Then, the following month, on February 10, news came to the council that some of the trees had disappeared. Several days later the vast majority of the trees were missing.

With the protective sleeves left piled up and no signs of the trees themselves, the council are confident that this is an act of theft and not vandalism.

Parish council clerk Sue Hanman suspects that the trees were stolen to be sold, based on the sheer amount taken.

“You try and do something for everyone and then some selfish individual has gone and taken them for their own benefit. It is very disappointing.

“I don’t think we’ll be replacing them at the moment. We can’t afford the cost of the trees, and to be honest the same thing would just happen again.”

Though Ms Hanman says the theft was completely unexpected by the council, her regret is that this will impact upon the future decisions they make for the area.

She continued: “We may look at other schemes and question whether or not it’s worth it. The bigger issue is that next time people will say it’s not worth it because this has been so demoralising.

“We don’t have a vandalism issue hear and the young people do look after the facilities down at Jubilee Fields.

“The person who has done this, who I would imagine is an adult, has just spoiled it for everyone.”

The chief executive of the SVP Clare Mahdiyone was left similarly upset by what has has happened.

“It’s heartbreaking that this has happened after our volunteers have put in their time and energy to get these trees planted.

“The work we do is all about improving our local area and involving the local committee.

“I do wonder if there’s any local businesses that would be interested in supporting our project to get these trees replaced.”

If you have any information on the stolen trees get in touch with Gloucestershire Police by calling 101 and quoting incident number 137 of February 20. Alternatively, contact the council directly by calling 01453 548884.

The SVP works across the Stroud District protect and enhance the local environment by working with local communities to embrace sustainable development and biodiversity. They are based in Stroud’s town centre where they operate an eco shop.