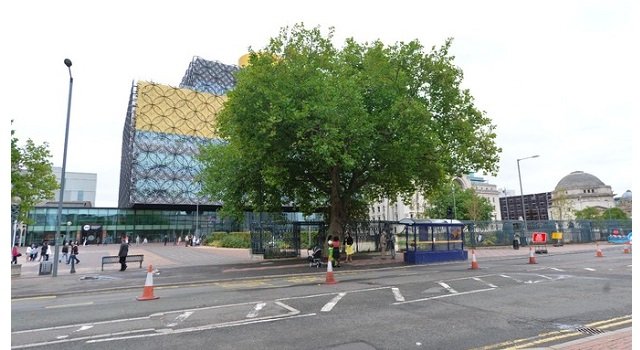 Tough new anti-terror measures are thought to be the real reason behind a controversial decision to axe a historic Birmingham city centre tree.

Campaigners have been battling to save the Centenary Square tree, which has stood in the same position since the 1930s.

It had been thought that the decision to fell the London Plane tree – thought to be around 95 years old – was to make way for a Metro tram extension.

But its removal is actually part of council plans to beef up security around the showpiece square to prevent a Nice-style terrorist attack.

Heavy stone benches, with deep foundations, are being installed along Centenary Square to stop a heavy lorry being driven into the square.

The benches are being installed this year as part of the £10 million revamp of the Square, and the tree will now get the chop within weeks.

Birmingham City Council deputy leader Ian Ward (Lab, Shard End) said: “These benches are actually a barricade and need deep foundations. This will unfortunately mean the tree roots being cut. We looked at moving the bench forward, but we need the space in the Square for big events such as the Big Wheel and ice rinks, and the Remembrance Parade.”

Heavy concrete bollards were installed at the entrances to the Frankfurt Christmas Market in Birmingham last month.

Just days later, a truck drove into the Berlin Christmas market in an attack that killed 12 people.

In July last year, a truck was deliberately driven into crowds celebrating Bastille Day in Nice, resulting in the deaths of 86 people and injuring 434.

Councillor Ward said that while 25 trees, including the large London Plane, are going, 59 replacement trees will be planted. “It will be more than acceptable to compensate,” he added.

Campaigners, including members of the Birmingham Trees for Life group, had called for the tree to be preserved and said that both the Metro and Centenary Square revamp could be planned around it.

More than 1,300 people have signed an online petition to save it.