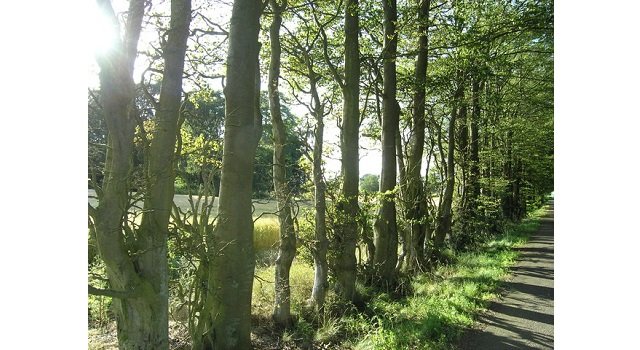 A row has broken out after dozens of trees were cut down outside a council’s headquarters.

People were left outraged when trees in two courtyards at County Hall in Morpeth, Northumberland, were felled over the weekend of January 21 and 22.

Northumberland County Council said they had become large and overgrown, blocking natural light into the offices.

On Tuesday, protesters tied yellow ribbons around trees at the site as the felling work continued.

The land is being cleared as it has been earmarked for the new £5.7m Morpeth First School.

Councillor Andrew Tebbutt, of Morpeth Town Council, met with the council’s chief executive Steven Mason on Tuesday in a bid to save the trees.

Coun Tebbutt said: “We’re really disappointed the council has refused to stop felling the trees, saying that they want to proceed with the school build as soon as possible.

“It is almost beyond belief that two courtyards, with mature trees and used by staff in lunch breaks, can be wilfully destroyed so far in advance of any final decisions on the future of the site.

“They obviously believe they will get planning permission but how can they assume the majority of members on the planning committee will support the plans? Pre-determination is not allowed.”

Coun Peter Jackson, leader of the Conservative group, accused the council of vandalising the land.

He said: “This is just one example among many which shows how they are actively trying to destroy the character of many of our communities across the county.”

However, the council said it was clearing the trees and bushes ahead of a planning decision to build the new school.

A council spokesman said: “By doing some preparatory work now it would allow the scheme to progress more quickly if the proposals are given the green light, by removing those trees within the footprint of the proposed school buildings before birds come to nest in the spring.

“Subject to planning permission, the new school is expected to open its doors in late 2018 and the landscaping scheme for the school seeks to retain as many of the existing trees as possible.

“This includes keeping most of the existing tree lined-avenue to create an attractive pedestrian route to the new school entrance.”

Image © Copyright Andrew Tryon and licensed for reuse under this Creative Commons Licence.