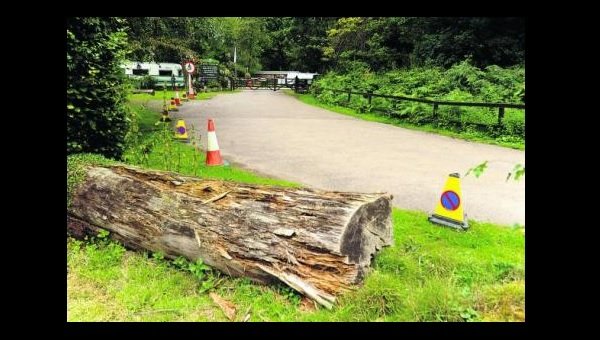 Timber barriers that have been put up at Savernake Forest are causing anger and frustration among many visitors to the 4,500 acre oasis, it is claimed.

The Forestry Commission says logs have been placed across some access points to prevent cars damaging internationally important trees.

But some visitors say they are destroying their enjoyment of the ancient woodland and are creating hazards and difficulties for drivers.

The barriers were put up to protect trees bordering the forest car park and its picnic area just off the A346.

But visitors say they are severely limiting access to the car park and those who can’t get in have to park along a small track. This, they say, creates problems with drivers who can’t find a space reversing back down the track, which is often clogged with parked vehicles and with other drivers coming the other way, trying to get in.

“It’s absolutely disgusting what they’ve done – they are ruining the forest for the thousands of people who go there,” said Leslie Thomas, 50, of Chippenham.

“It’s such a beautiful place. People go there to relax and unwind, to have picnics and barbecues. It had always been easy to park there. Now you’ve got to get there really early in the morning to find somewhere to park otherwise there’s no point.”

Mr Thomas, a car recovery operative who likes to take his 11 year-old son Declan to Savernake, went on: “I’ve been going there for years and it’s always been a great place for a day out – until now. People are now arguing with each other because of all the parking and traffic problems. It defeats the whole point in going.”

Mother-of-three Concetta Barbagalo, 63, of Gorse Hill, Swindon has been visiting Savernake for around 20 years, first with her children and now her grandchildren.

She said: “It’s so upsetting to see what they’ve done. People come from miles to Savernake and now they are faced with all sorts of problems getting in and out and parking. I saw a caravan trying to turn round on the access track the other day and it took 45 minutes. The Forestry Commission has no consideration for visitors.”

Commission spokesman Heather Lilley said cars parking under trees had compacted their roots and as a result the trees were showing signs of suffering.

“The area is safer for visitors too as parking is restricted to hard standing and cars are not driving across the grass where children play. We have received many favourable comments saying the area is safer and looks more respectable now.”

She said the commission is now reviewing options for the picnic and parking area at Savernake.