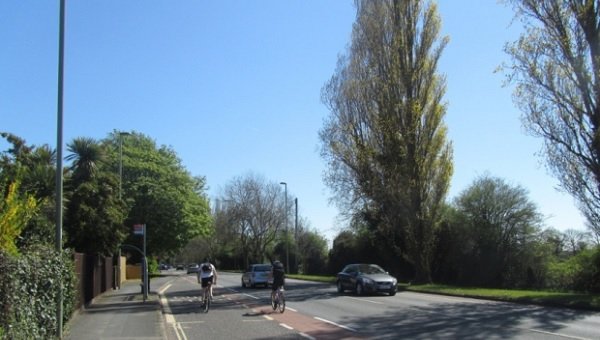 Environmental campaigners are angry over the ‘industrial scale’ felling of trees in a highly protected area – because the owner says they could poison her horses. Seven sycamores in a field that borders Havant Road, Emsworth, are to be removed because the person who leases the field says their seeds are toxic.

Two of the trees in the row are protected under tree preservation orders but, despite this, the horse owner chopped one down and was halfway through cutting down the second one when she was stopped by Havant Borough Council.

She was issued with a caution and then told to submit a planning application before she removed the rest of the protected tree – which the council had to grant because the tree was no longer ‘sustainable’.

Because the other five trees are not protected they can be felled.

In a statement Chichester Harbour Conservancy, which looks after the Area of Outstanding Natural Beauty, said it was ‘unconvinced’ by the justification for felling and was against the move.

Ray Cobbett, the Hampshire co-ordinator of Friends of the Earth, said: ‘Felling on an almost industrial scale as is proposed and for the reasons given makes a mockery of tree protection measures. It sends out entirely the wrong message to others who may be contemplating similar applications.’

Frances Jannaway, the voluntary tree warden co-ordinator for Havant, said the loss of trees would affect the look of the street.

She added: ‘It is a shame that we’re going to lose them.

‘I understand horse owners are worried about the toxicity of sycamores but they also have a responsibility to make sure their horses have enough food at certain times of the year and they don’t put too many horses in fields now it’s known about this toxicity to horses.

‘It’s an easy option to cut the trees down.

‘Last year was a very big harvest for sycamore trees but horses only eat the keys if they have nothing else to eat.

‘A lot of people don’t like sycamores but they are essential for interaction with the natural world.’

Neighbours in the surrounding roads also opposed the application, saying the prevailing south-west wind blew most of the seeds away from the field, not on to it.

The protected trees must be replaced with an oak tree.