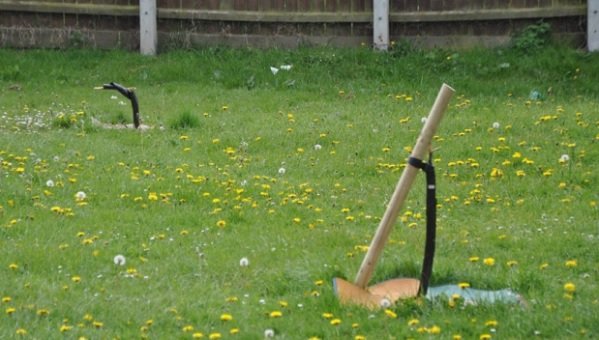 A trustee at a Wyre park today told of his devastation after trees in a community orchard were vandalised.

Now Joe Gilmour has appealed to members of the public and neighbours to keep a watchful eye on Garstang’s award-winning Kepple Lane Park.

And he has vowed not to let the vandals destroy the good work of Garstang Transition Group, which was the driving force behind the decision to plant an orchard at the park.

Purchase of the fruit trees was funded by cash raised at Garstang’s Victorian Christmas Festival and a £260 grant from the Tree Council.

He said: “As a member of Garstang Transition and a teacher of the Moorbrook School pupils and a Kepple Lane Park Trustee I have been very closely involved in this project. I’m sure I don’t need to say how upset I am by all this.”

Mr Gilmour, who lives near the park, added: “At the beginning of May, we were shocked to discover three of the new trees had been vandalised.

“We decided to tidy up the stumps as there was a good chance the trees would recover, and hoped this was a one-off.”

But, last week the same three trees were vandalised again. He said: “Two have been snapped off at ground level. One shows no signs at all. Two further trees have had the tops snapped off…We are devastated by it.”

He added his pupils would be very upset and said: “They worked hard digging those holes – they were an absolute credit to the school.”

It is now hoped replacement trees can be planted next winter.

The park includes a sensory garden, willow walkways and extensive play and sports equipment for all age groups, was the result of a community project led by Town Councillor Gordon Harter.

Mr Gilmour said: “It is such a shame that we should be victim to such mindless violence.

“I would ask all those many users of the Park to be vigilant, we don’t want this to  continue.”

Earlier this year the “green roof” on the Youth Shelter at the park had to be replaced at a cost of some £400 after it was damaged by being climbed on.

Joe urged anyone with information about the vandalism, or who fears it is taking place, to contact the police.