Anger after trees are torched at nature reserve 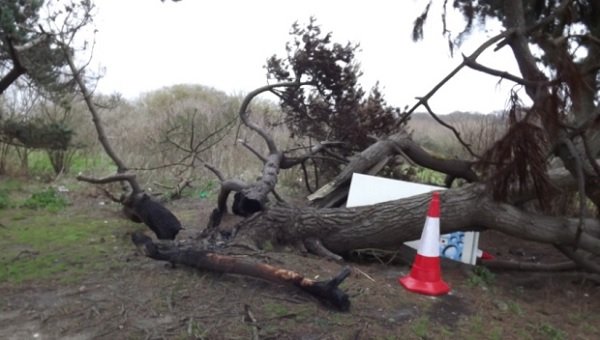 A copse of trees at a nature reserve was left a burnt-out wreck after vandals went on the rampage.

Walkers were shocked to the discover the damaged pine trees at the Hayling Oysterbeds, off Havant Road and close to the Billy Trail.

The clump of trees were a feature at the reserve, which supports hundreds of terns and several species of gull.

The vandals used coals and newspapers to light a fire at the base of the copse.

Trunks were reduced to cinders by the time walkers discovered the damage.

The offenders left a trail of mess at the reserve, including traffic cones and a placard.

Paul Morrell, 60, who lives in north Hayling, was shocked by what he saw.

He said: ‘It’s a real shame that people don’t have any concern for the environment there. It’s a nature reserve and one of the nice places to visit on Hayling Island.

‘If that clump of trees goes it will partly destroy the environment there.’

He added that one of the trees might survive.

Mr Morrell added: ‘It’s probably people who have gone down there at night-time and no-one knows they are there.’

The nature reserve is owned by Havant Borough Council and managed by the RSPB.

‘I can’t for the life of me understand why people would vandalise trees.

‘We are trying to make the oysterbeds attractive to walkers and cyclists.

‘The last thing we would is trees damaged.

‘It’s a sad day when people start burning trees down.’

Cllr Pearce added that he would look into getting trees planted at the reserve that have been lost.

The pictures of the vandalism have attracted comments on social media site Facebook.

One poster wrote: ‘Some people just can’t appreciate the lovely surrounding they live in.’

Another said: ‘So very sad, why torch living trees?’