Anger after iconic tree cut down at historic Ardboe graveyard 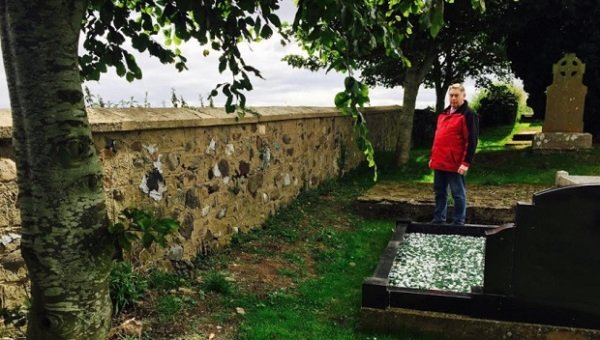 An Ardboe man has voiced his anger after another local took it upon himself to cut down the ‘big tree’ his father-in-law asked to be buried under.

Over the past few years John O’Hagan said around six large trees have been cut down in the centuries-old graveyard without permission – with the latest two facing the chop in the last few months.

Two disappeared overnight, but the ‘Friends of the Old Cross’ founder said he knows who is responsible for cutting down the rest.

Furious at the tree felling, John said: “My father-in-law asked to be buried next to his best friend, and under the big tree.

“The big tree, now as you can see, is lying in a corner of this field.

“They took them down a few months ago with no permission from nobody.

“It was about 25ft tall, it would have been the biggest tree in the graveyard.”

When asked if he thought the men had permission to cut down the tree, he added: “They know it’s a council run graveyard.

“They’re coming in and doing whatever they want… they’re just a law on to themselves.

“When I was the caretaker, I asked them why they cut them down and he said ‘the roots were growing into the grave of his father-in-law and mother-in-law’, and I says ‘before they picked that place the trees were there’ – so they shouldn’t have touched it.”

A spokesperson for Mid Ulster council, which runs the public cemetery and funds its upkeep, said: “No-one has been given permission to cut trees at the cemetery and they should not have been removed.

“Members of the public should never carry out work to any property which is owned or maintained by the council and would strongly urge anyone with information about these incidents to contact us so that we can take appropriate action.”

Founded by the family that looked after Ardboe’s High Cross, Abbey and graveyard until the council took over running of the historic site, Friends of the Old Cross was set up to look out for the landmark’s best interests.

John O’Hagan was the last local keeper of the ancient cross, and before him, his father-in-law worked the site for over 40 years, taking it over from his dad before him.

He is now appealing to those with relatives buried in the graveyard to leave the trees alone.

The group’s recent campaign against the use of weed killer along pathways and around graves resulted in the council reseeding the grass, much improving the cemetery’s landscape.

John O’Hagan and his wife Margaret said they are “very happy” the council took their concerns seriously and have also praised them for clearing away the rubbish left lying against the wall of the old Abbey.