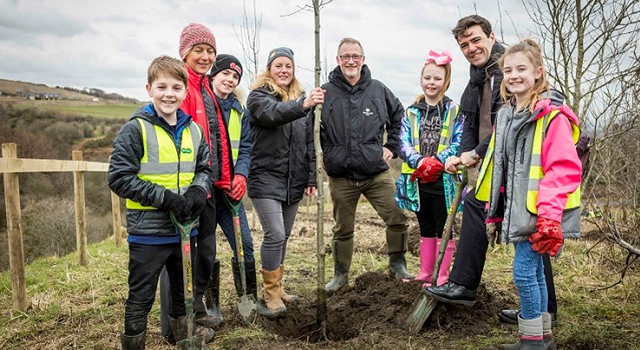 School children, spades at the ready, are this week turning out in force to play a hands on role in creating a greener landscape for their future.

Mayor of Greater Manchester Andy Burnham joined them on Wednesday 14 March to plant trees at Smithills, the first site of the ground-breaking new Northern Forest.

Conceived by the Woodland Trust and England’s Community Forests, including City of Trees in Greater Manchester, Government provided £5.7m to kick-start the £500m project in January.

This week sees the first of the trees going in to the ground at the Woodland Trust’s new Smithills site on the edge of Bolton.

“The Northern Forest is an ambitious and impressive project and I’m pleased to have played my part in planting the first of what will become 50 million trees established over the next 25 years.

“We do things differently here in Greater Manchester – City of Trees is our bold plan to plant a tree for every man, woman and child in our city-region within a generation. We are working to deliver an outstanding natural environment for everyone living and working here, able to be accessed and enjoyed by all.”

Pupils of St Peter’s Smithills Dean C of E Primary joined Andy Burnham in planting on Wednesday, one of many local schools taking part in the project.

“We’ve not seen an ambitious project like this this century. It will take £500m, 25 years and 50 million trees to bring it about. This week marks the start and we’re impressed by the excitement and enthusiasm shown by the children.

“By the time they leave education the trees will be almost to the tops of their heads and starting to take the shape of a young woodland, and by the time they raise their own children it will be teaming with wildlife. That’s a wonderful thing to remember you’ve been part of .”

“This is just the start and gives new momentum to the large numbers of planting activity we do across the city region to bring trees into the heart of urban areas for the benefit or people and wildlife.”

“The Northern Forest is a ground-breaking project which is bold in its aim and never more needed! England in particular is losing trees, with planting rates stalling and woods lost.  The north in particular needs to benefit from investment of this kind with woodland cover woefully meagre at just 7.6%, well below the UK average of 13% and far below the EU average of 44%. And that’s significant, as investment in green spaces and trees in particular are shown to improve our health and well-being, create more prosperous communities and areas more resilient to the effects of climate change.”

On Saturday The Trust alongside City of Trees is welcoming the general public to come along and do the same. To reserve a spade, visit its website.