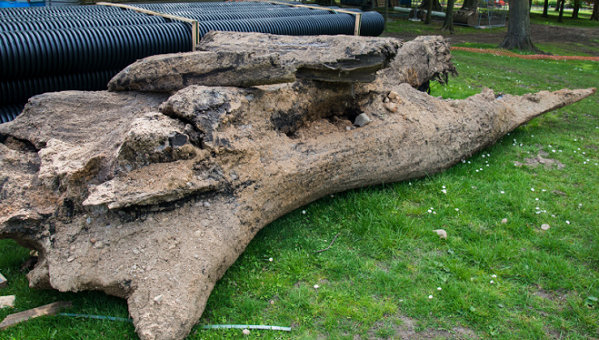 An ancient tree has been located in a popular Scottish park, as well as an Ice Age Rock. The two finds were unearthed by workers carrying out renovation works in the park, and are now due to be examined by scientists.

The glacial rock and tree trunk were found buried under layers of silt in Aberdeen’s Seaton Park, which is currently being transformed into a 90,000 pounds wildlife wetlands.

The ancient tree trunk, which was also found beneath one of the park’s sports pitches, is thought to have been deposited in the area when the green space still formed part of the nearby River Don. Whereas the rock is believed to have been washed down into the area during the ice age.

The contractors carrying out the wetlands work have now asked a university expert to look at a sample of the tree in a bid to determine what species it is and how old it is. The tree has already been moved next to the new wetland area and Aberdeen City Council plan to include details of both the rock and tree in an information panel to provide a bit of history of the park.

The local authorities communities, housing and infrastructure vice-convener Councillor Jean Morrison said: “It’s been great to see the work come together at Seaton Park and then for these two discoveries to have been made, makes it even more exciting.

Seaton Park is one of the city’s busiest green spaces, but in recent years, the playing fields have been repeatedly flooded by several feet of water which builds up on the surface. Aberdeen City Council is now in the process of transforming the flood-prone parkland into a manmade wetland. Council officials hope that by creating the area it will be easier to manage the water that accumulates through the year.

The work is due to be completed by the end of the month.